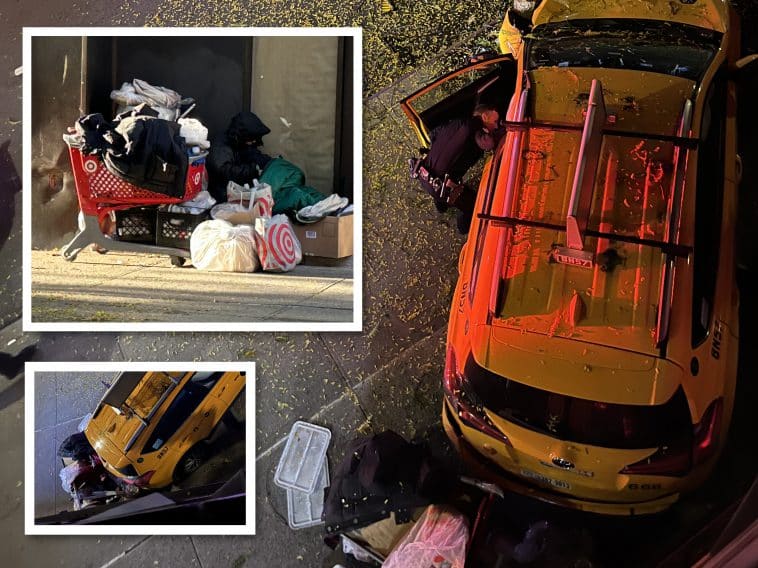 A homeless man sleeping near an Upper East Side street corner is lucky to be alive after an out-of-control taxi jumped the curb overnight and slammed into a tree and building, coming to rest just inches from where he was laying down. A witness tells Upper East Site that even the first responders could not believe the man’s luck.

“Police just kept saying ‘I don’t get it, how did this happen? How is it even possible?’” said neighbor Jacqueline Cerniglia Dion, recounting the moments after the frightening collision that woke her up just before 3:30 am Saturday morning.

The taxi’s driver lost control on East 68th Street, just east of Third Avenue, went up on the sidewalk and crashed into the tree with such force, it appears the rear end of the Toyota swung around to the right, the rear-end slamming into the building steps from the sleeping homeless man.

In the light of day, a hole could be seen punched through the metal facade of the building from the impact of the taxi — streaks of yellow paint decorate the area around the damage.

In photos shared with Upper East Site, bags packed with belongings from the man’s doorway encampment can be seen sitting inches from the rear end of the SUV smashed into the building. Dion says the homeless man just moved into that spot just a day earlier.

“He’s always in front of Food Emporium and legit just moved to this new spot by [the] vacant old HSBC bank yesterday,” she said.

Upper East Site tried to ask the man about the death-defying crash, but he was still in a deep slumber when approached around 10:00 am Saturday — Dion says the man refused to speak with bewildered police after the crash as well.

FDNY officials tell Upper East Site the driver of the taxi had to be removed from the vehicle by firefighters — the SUV’s front door could be seen twisted in the wrong direction to free him from the vehicle.

An instruction manual for a neck brace apparently used by paramedics to stabilize the driver’s neck after the crash was discarded at the scene, while the driver himself was rushed to Weill Cornell Medical Center for treatment.

Details on the driver’s condition were not immediately available. 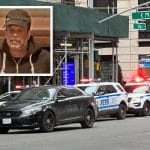 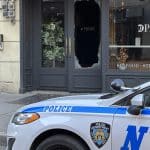