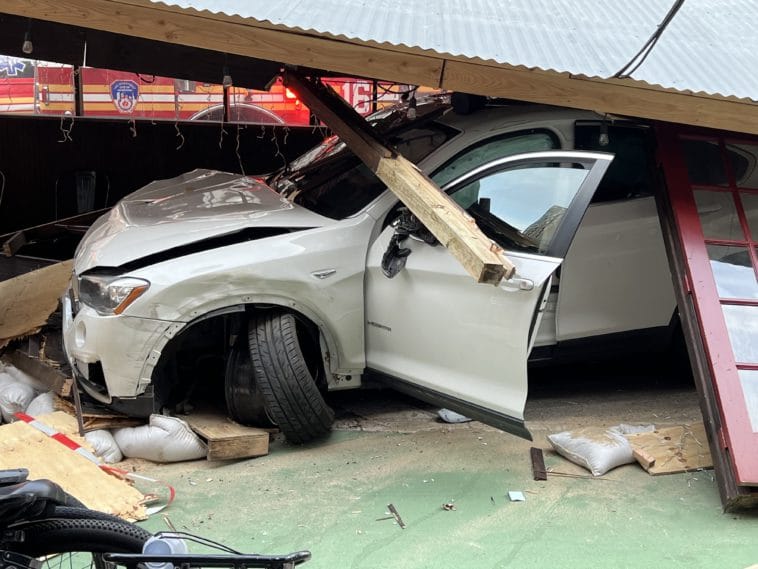 MANHATTAN – An unlicensed driver slammed her car into a parked SUV on First Avenue before crashing into the outdoor dining shed belonging to an Upper East Side bar late Monday afternoon, police told Upper East Site.

The violent collision sent the roof of the structure, belonging to the Sefton Bar, crashing down on the vehicle in a harrowing scene that investigators say left the driver and passenger hurt.

Police say the white BMW was driving northbound on First Avenue on the Upper East Side when it struck a parked Honda SUV then careened into the structure near the corner of East 74th Street. The front wheel of the mangled BMW was twisted in the wrong direction and the car’s airbags deployed.

The driver, a 44-year-old woman, and her passenger, a 29-year-old man, suffered minor injuries in the crash, detectives said, and no pedestrians were hurt.

The Sefton Bar says thankfully no one was inside the outdoor dining structure when the crash occurred Monday afternoon. Debris from the damaged dining shed, broken chairs and tables were strewn across the bike lane between the structure and the sidewalk.

A crowd of on-lookers gathered outside the Sefton, many taking photos and video of the wreckage in front of them.

Police tell Upper East Site the BMW’s driver was issued a summons for driving without a license and their investigation is ongoing. 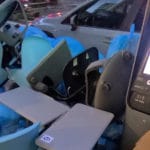 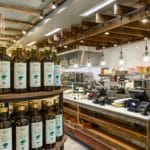