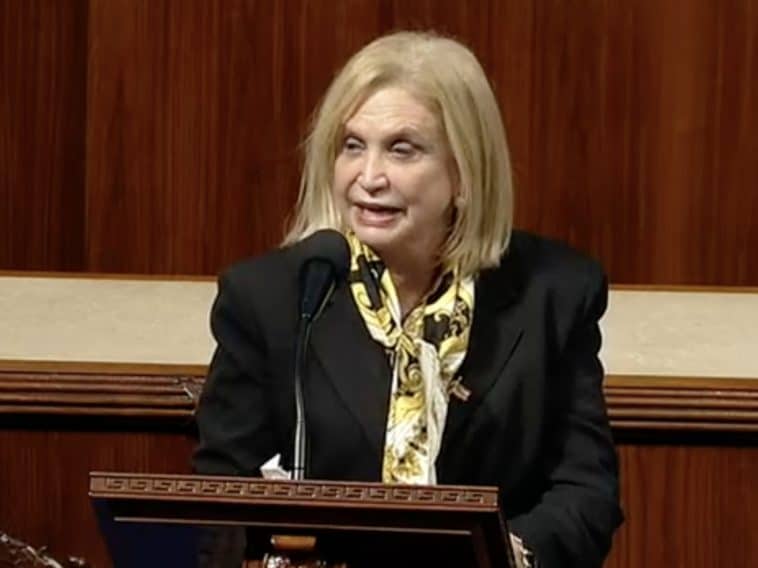 It is the end of an era on the Upper East Side and in Washington DC, as longtime Congresswoman Carolyn Maloney says goodbye, delivering her farewell remarks on the floor of the House of Representatives Thursday and bringing her decades of public service fighting for New Yorkers and Americans — which were not without controversy at times — to an end.

“My career has been a series of firsts,” Rep. Maloney said, touting her role as a trailblazer for women in government who shattered glass ceilings throughout her lengthy career.

With a custom made FDNY jacket bearing her name by her side — created during her efforts to secure federal dollars for September 11th victim’s compensation fund — Carolyn Maloney, 76, spoke proudly of ‘transformational’ legislation she sponsored that was signed into law by five different Presidents.

“Even President Trump signed my Never Again Education Act to support Holocaust education programming, as well as 9/11 health and compensation — which is part of why I’m wearing this coat today, as I did until the bill passed,” Maloney explained, “and we still need additional funding for this vital program this year.”

ALSO READ | Moratorium on Massive 5G Towers Approved by UES Community Board, May Not Slow Rollout

Here on the Upper East Side, Congresswoman Maloney explained that the things she and her team has been able to accomplish for the neighborhood has been nothing short of incredible.

“It has been the honor of my lifetime serving East Siders from my days on the City Council to my time in Congress, Rep. Maloney told Upper East Site on Friday.

“From transforming the way East Siders move around the city with the 2nd Avenue Subway to the restoration of the East River Esplanade to building the Eleanor Roosevelt High School, I am so proud of what I have been able to do for our community with the help of neighborhood advocates and years of dedication.”

Looking ahead toward the difficult fight facing the next Congress without her experience and leadership, Maloney also reflected on women’s reproductive rights being set back 50 years.

“It’s hard to believe that in 2022, our Supreme Court didn’t chip away at abortion, they bulldozed our rights into the ground –- depriving 33 million women of access to abortion,” Rep. Maloney said during her final remarks in Congress.

“Together, we have bent the moral arc of this nation in the direction of justice and fairness,” Maloney told her fellow members of Congress from the House floor, “but we mustn’t rest until ‘equal’ means just that”

“I have always regarded public service as a loan that I must repay each and every day I am in office,” she said bringing her remarks to a close, “Thanks to your tireless efforts, wisdom, and support, I feel like I leave office debt-free.”

Maloney is currently the subject of a House ethics investigation over alleged ticket requests to the Met Gala. She has denied any impropriety.

Although Carolyn Maloney is leaving office after all these years, Maloney tells Upper East Site this won’t be the last we see of the longtime public servant.

“While my time in Congress is coming to an end, my days advocating and fighting for our community have not. The best is yet to come.”