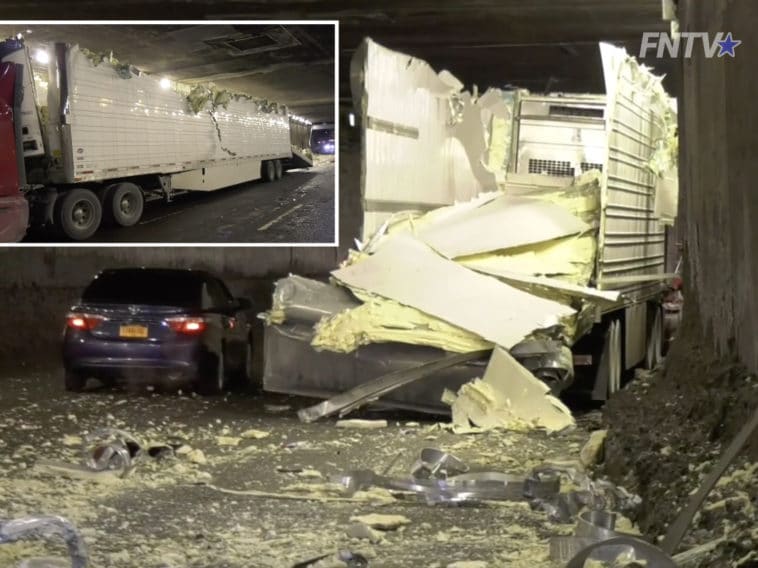 MANHATTAN – A tractor trailer way too big to be driving on the the FDR Drive southbound was torn open early Monday morning when the top of the oversize vehicle slammed into the low ceiling of the overpass near Gracie mansion at East 90th Street on the Upper East Side.

Video from our news partners at FreedomNews.tv show cars creeping around the shredded metal and insulation of the trailer– sheared open like a tuna can, with debris littering the roadway— as the mess took up two lanes of the FDR Drive in Yorkville.

Tractor trailers and oversize trucks are prohibited from driving on the FDR Drive for this very reason.

One driver’s windshield was smashed by debris from the wreckage, which was scattered all over the roadway and took hours to clean up.

It’s not clear what the driver was hauling in the dangerously oversize trailer—a look inside with the torn open metal and debris, there does not appear to be any load being transported.

It’s not unusual for trucks too large for the FDR Drive to end up in precarious situations— in fact, police are called to that very spot of the highway on the Upper East Side multiple times each year.

In one instance, caught on camera in July 2020, a Ryder rental truck got wedged inside the tunnel and NYPD officers had to help the driver back it out and off the highway.

#BREAKING – Traffic was backed up for miles on the FDR Drive on the #ues where police blocked the roadway because a rental truck was #stuck in under an overpass just south at 92nd street, by Gracie Mansion. Contact [email protected] pic.twitter.com/dX8EIc9dtB

Police could not immediately say whether any injuries were reported in Monday morning’s incident. 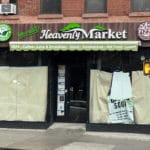 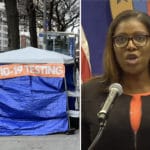