A wild scene on a quiet Upper East Side block, as NYPD officers flooded the block Monday night, converging on suspects wanted in robbery at a Lenox Hill smoke shop, police say. The four suspects were busted just blocks from the scene of the crime, witnesses say, after a dramatic foot chase in the dark of night.

“It was crazy,” an eyewitness told Upper East Site.

The longtime Upper East Sider explained how he saw two NYPD officers running after one of the suspects, chasing him down East 78th Street and onto the the FDR Drive pedestrian bridge next to John Jay Park.

“Then a couple cops actually collared someone right in front of my building,” the eyewitness told us, “[I] heard the perp yelling get off me.”

“Then just a lot of cop cars, couple ambulances,” he explained. “It was a scene.”

Eyewitness video shared with Upper East Site shows NYPD officers handcuffing one suspect on the ground on East 78th Street, east of York Avenue. In another clip, two suspects are seen being loaded in the back of NYPD squad cars.

The commotion drew neighbors to their windows and even out on the street, some recording video of the bust unfolding outside their windows at 10:45 pm.

Investigators say the suspects jumped over the counter and roughed up the 19-year-old store clerk, putting him in a headlock while they stole merchandise from behind the counter.

Police have identified two of the suspects as 19-year-old Dylan Jervey of the Upper East Side and 22-year-old Christian Rivera of the Upper West Side. The two other suspects arrested by police were not identified because they are 17 years old.

According to NYPD crime reporting data, the number of robberies on the Upper East Side has shot up more than 46% this year, compared to last year. That translates to a total of 171 robberies reported to police, as of September 18th.

“I’ve lived on the UES most of my life,” the eyewitness explained, “never have [I] seen crime like this.” 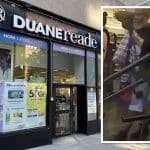 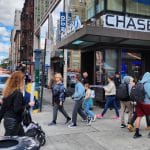