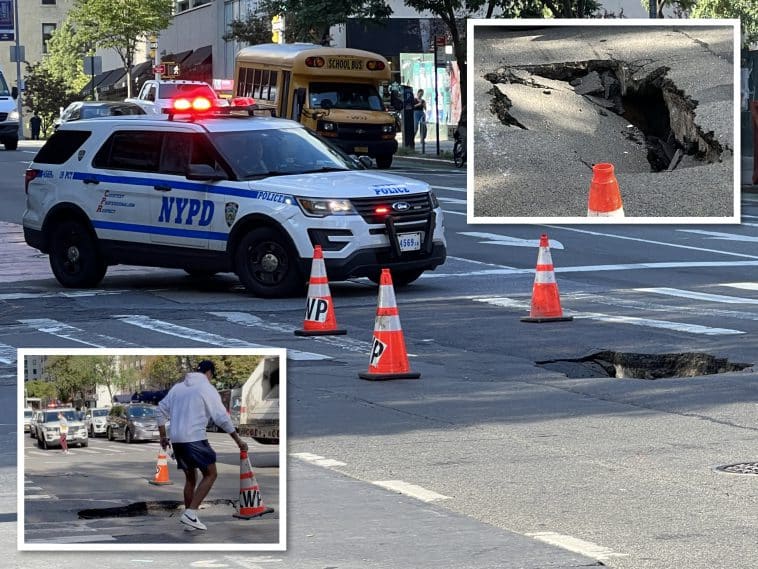 Two Good Samaritans came to the aid of drivers— preventing a possible catastrophe— after seeing a huge sinkhole open up in the intersection of First Avenue at East 86th Street in Yorkville Tuesday morning. The men grabbed cones from a nearby construction site to block off the gaping hole in the street and waved traffic around the hazard before NYPD officers arrived at the scene.

“It just happened,” said one Good Samaritan, who spotted the large hole while crossing the street around 9:30 am, explaining what happened to Upper East Site.

“We just put the cones down,” he added, “it’s pretty scary.”

“We walked our daughter to school and this hole wasn’t there,” Jenna told Upper East Site, “by the time we walked back, it came out of nowhere.”

Police officers were on the scene within minutes of the Good Samaritans taking action, using their cruiser NYPD cruiser to block the lane of traffic on First Avenue to keep any vehicles from driving straight into the crater.

“That is some hole! Wow!” a sanitation worker could be heard exclaiming from his DSNY truck, which had to change lanes to avoid the potentially vehicle-crippling hole— which appeared to be at least two feet deep and had a large piece of sunken roadway still visible inside.

Thankfully Tuesday’s street collapse is relatively small in size compared to the massive sinkhole that opened up on nearby East 89th Street last year— which was roughly 15 feet in diameter with a depth of 20 feet.

Upper East Site reached out to the Departments of Transportation and Environmental Protection for more information and a timeline of repairs, but did not hear back by time of publication. 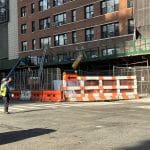 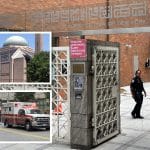