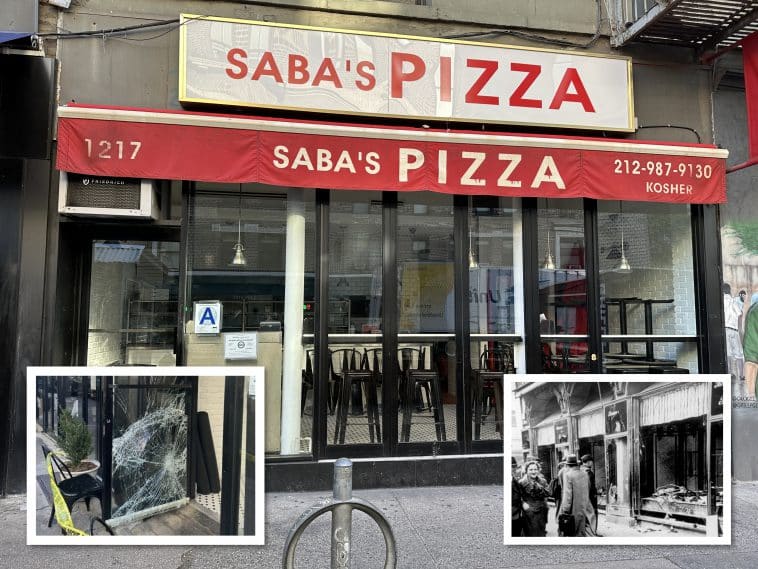 Concerns about antisemitism on the Upper East Side continue to grow, fueled by two attacks targeting kosher restaurants in the neighborhood just days before the anniversary of the Kristallnacht — a coordinated wave of antisemitic violence in Nazi Germany dating back to November 1938.

The NYPD confirms to Upper East Site that around 10:00 pm Tuesday night, a suspect approached Saba’s Pizza — located at 1217 Lexington Avenue, between East 82nd and 83rd Streets — shattered the glass front door to get in the restaurant, then swiped the cash register with more than $1,800 inside.

This is the second time in less than 18 months that the Upper East Side’s only kosher pizzeria was targeted by criminals. The same front door at a Saba’s Pizza was shattered back in May 2021, as well the entrance to the kosher restaurant next door — Pastrami and Grill — which was ransacked days later.

This time around, it’s Grill Point — the kosher Israeli restaurant that replaced Pastrami & Grill next to Saba’s — that was burglarized. A worker at Grill Point told Upper East Site that a cash register was stolen last Saturday, however, the NYPD could not immediately confirm those details.

It’s not yet clear whether these incidents will be investigated as hate crimes, however, they evoke troubling parallels to the Kristallnacht, or the ‘Night of Broken Glass’ — whose 84th anniversary was overnight Wednesday into Thursday this week.

At the time, Nazis used the cover of darkness for a coordinated series of attacks terrorizing Jews in Germany, destroying Jewish-owned businesses and burning down synagogues — while telling police and fire brigades to ignore the antisemitic violence. The next day, tens of thousands of Jewish men were arrested and sent to concentration camps.

Regardless of the suspect’s motivation, the timing of attacks on these establishments is unnerving to Jewish Upper East Side residents who are witnessing antisemitism on the rise.

“This type of behavior is a wake-up call that hate lives in your own neighborhood; just as the Jews of Nazi-occupied Europe were made tragically aware of,” explained Alyson Cohen, a psychotherapist who calls Upper East Side home.

“This is a reminder: In the eyes of an antisemite, we are all the enemy,” Cohen added.

“After the signs over the [freeway in California supporting Kanye West’s antisemitic statements] I knew that the Jewish hate would get louder and more overt,” said Stacie Gross, “I’m a very proud Jewish woman and unfortunately this shows that the holocaust can absolutely happen again.”

Hate crimes in New York City have increased 14% this year compared to last year — far less than the staggering 85% spike in bias incidents on the Upper East Side this year, according to NYPD Data.

“Restaurants that comply with jewish dietary laws and are burglarized on Kristallnacht should always be investigated for potential hate crimes. It is deeply upsetting for any business owner to have their store targeted once, let alone multiple times,” said Council Member Julie Menin.

“My office has been in contact with the NYPD as they investigate these crimes and hold those responsible accountable.” 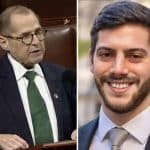 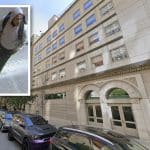