An armed and dangerous robber responsible for two stickups inside an Upper East Side subway station — just two days apart — used a large kitchen knife in at least one of the robberies, according to police. Investigators are turning to the public to help track the suspect down.

Last Sunday, November 20th, around 5:30 am, detectives say the suspect approached a 22-year-old man standing on the southbound 4 train platform inside the 59th Street-Lexington Avenue subway station, pulling a large kitchen knife and demanding he turn over his property.

The victim complied, police say, handing over his iPhone 14 to the suspect, who then made his escape.

This time around, police say it was 7:10 pm in the evening when the suspect brandished a knife and robbed a 23-year-old woman of her iPhone 13 as she waited on the southbound 4 train platform inside the 59th Street subway station.

Thankfully, neither victim was injured during the knifepoint robberies.

Police describe the suspect as a male, 15 to 25 years old. In a surveillance photo released by police on Wednesday night, he’s seen wearing a black leather jacket over a light-colored hoodie, burgundy Nike sweatpants and white sneakers with red shoelaces.

It is not clear which of the robberies the surveillance photo was taken from.

The 59th Street-Lexington Avenue subway station has become a hotbed for crime underground, with a total of 24 robberies, assaults and grand larcenies reported in the station so far this year, according to NYPD data. That’s a 50% increase in crimes reported over the same time period last year.

If you recognize this Upper East Side subway robbery suspect or have any information that could help police, you’re asked to call the NYPD’s Crime Stoppers Hotline at 1-800-577-8477. 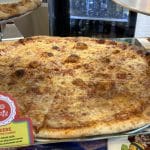 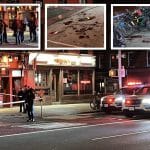