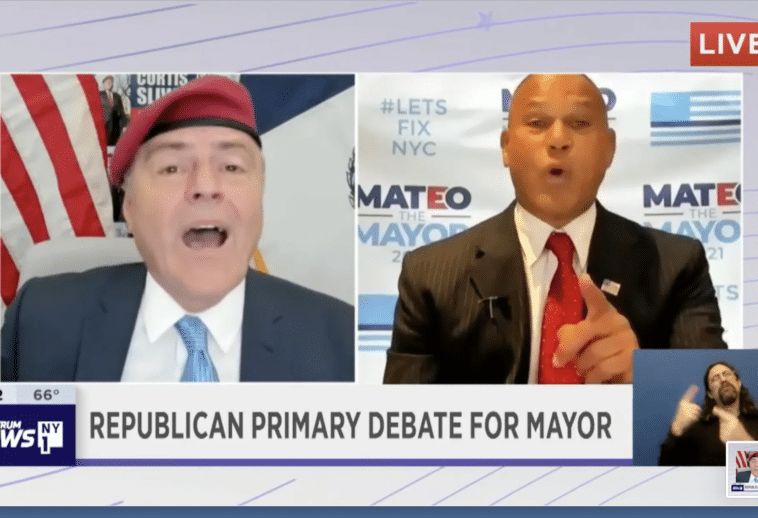 This article was originally published on May 26 at 9:22pm EDT by THE CITY

The two Republican candidates waging longshot bids to become mayor of New York City focused on attacking each other during a debate broadcast Wednesday night, overshadowing their shared campaign theme of public safety.

The raucous faceoff pitted Fernando Mateo, a restaurateur and advocate for bodega owners and taxi drivers, against Curtis Sliwa, a radio personality and founder of the Guardian Angels. The former allies, turned bitter foes by the race for the Republican nomination in an overwhelmingly Democratic city, sparred via Zoom.

The debate was broadcast on WNYC and NY1 –– with NY1’s Errol Louis moderating and asking questions along with WNYC’s Brian Lehrer and THE CITY’s Josefa Velasquez. The event gave the two candidates their biggest platform yet to reach voters in a primary race that’s divided GOP county committees across the city.

For all the epithets hurled — “clown” and “liar” among them — Mateo and Sliwa found some areas of agreement.

Here are some takeaways from the hour-long debate:

They Love the NYPD

At several points during the debate, Sliwa and Mateo emphasized their support for the NYPD and their plans to expand the department’s footprint amid a spike in shootings.

When asked about what reforms they’d put in place in the Police Department, Mateo said he’d add 20,000 cops to the force and would assign two police officers to every train station. He said he also would further empower his police commissioner.

“I support making sure that the NYPD has a real leader, someone who’s going to have their back 100%,” said Mateo.

Sliwa — who said he would “re-fund the police,” a shot at the defund movement — pledged to bring 5,000 more cops onto the subways.

“You don’t just need cops on the platform, you need them on the moving trains from the front car to the back car,” said Sliwa.

The two former pals didn’t hold back, shouting insults over one another throughout, driving Louis at one point to turn down their mics. “Guys, let’s not do this again,” he said.

Not that they stopped for long.

Mateo, who is far behind in the one major poll conducted on the race, called Sliwa a “compulsive liar,” made fun of his small, cat-filled apartment and repeatedly suggested the Guardian Angels leader become a subway conductor.

Sliwa accused Mateo of consorting with unsavory characters at his old Upper Manhattan restaurant, La Marina, and of refusing to ride the subways and living “up in Westchester in Irvington.”

“I’m the only candidate who rides the subway,” said Sliwa.

Mateo repeatedly went after Sliwa for only recently switching his registration to the Republican Party and for not voting for Donald Trump.

“Why did he just become a Republican to destroy any opportunity that we have as a party to win back our city?” said Mateo.

They’re Not Crazy About de Blasio

Sliwa tried to tie Mateo to Bill de Blasio by brandishing a photo of his rival laughing with the mayor.

He took aim at Mateo for bundling contributions for de Blasio’s old nonprofit, and called the mayor the “worst thing” to ever happen to the city.

Mateo defended his past de Blasio connections as working across party lines, and blasted Sliwa as a come-lately Republican.

He joined Sliwa in slamming de Blasio’s handling of the pandemic as unfriendly to business.

The debate audience didn’t include de Blasio, who told reporters earlier in the day: “That’s an hour I’m gonna save from my life.”

The candidates diverged on whether or not they believe former President Donald Trump’s lies that he won the 2020 election.

Sliwa answered with a simple, “No.”

Mateo said that he suspected a fraud was perpetrated. “I believe he won reelection, yes I do,” said Mateo.

When asked about freshman Staten Island Rep. Nicole Malliotakis’ vote against certifying the result of the election, both candidates said she made the right move, adding that Trump’s claims merited examination.

They Actually Agree on a Lot

After trading barbs for much of the debate, Sliwa and Mateo agreed on every one of a series of yes-or-no lightning-round questions.

Sliwa and Mateo also said that they’d direct the NYPD to work with federal authorities and wouldn’t require cops to live within the five boroughs.

Both have never ridden a Citi Bike.

And they found common ground underground: Their least favorite subway line is the C train.

Mateo agreed: “The worst one is actually the C train.”

The two Republicans will debate again on Sunday, June 6. The race’s major Democratic candidates will have two more debates, on June 2 and June 16.