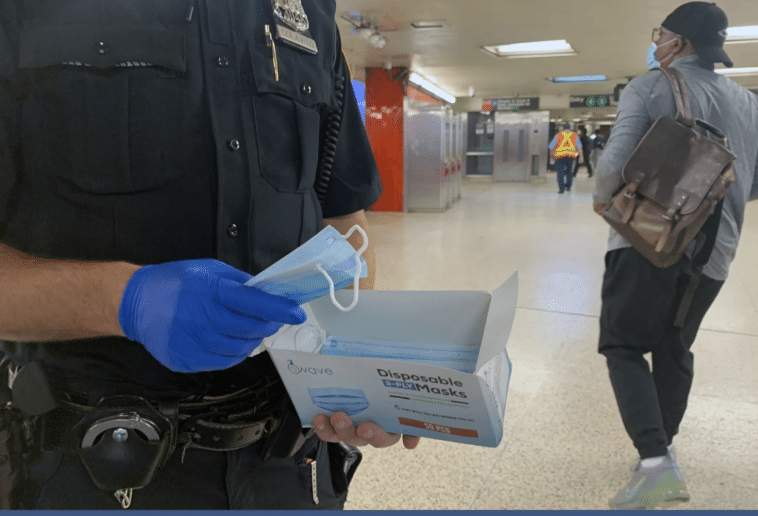 This article was originally published on Sep 22 at 5:27pm EDT by THE CITY

Police officers and transit workers distributed a record 26,000 masks in the transit system in the first three weeks of this month — topping the total for the nearly 12 months prior to September, according to MTA data released Wednesday.

And starting Thursday, more fines will be likely, officials say.

The first phase of a “Mask Blitz” encouraging commuters to follow the mask mandate on subways, buses and trains launched Sept. 7 — the day after THE CITY highlighted how zero riders were fined in August for failing to cover their faces.

The story also revealed that only 21 riders were booted from the system last month for not following an executive order on mask-wearing, a 96% dropoff from last December.

Cops and MTA employees handed out 26,078 masks in the first three weeks of this month, more than the 25,289 that had been doled out since Sept. 14, 2020 — when police could begin fining riders for not covering up.

The total of face coverings given out through this month through Sept. 21 is 519% higher than the 4,267 masks distributed in all of August.

Nevertheless, only one rider has been bounced from the system this month, MTA figures show, and none have been fined.

“Very few were handed out over the year because there were very few people that actually did not comply with the rules,” said Patrick Warren, chief safety officer for the MTA. “Our goal is not to hand out summonses, our goal is to get people to wear their masks.”

More than 4,500 were handed out last Thursday, MTA data shows, breaking the single-day record of 2,994, which had been set one day earlier. Prior to Sept. 7, that figure had never gone above 532, set July 23.

Warren described mask usage rates in the transit system right now as “good, but not great,” saying they have dipped to 87% in the subway, just over 90% on the MTA’s two commuter railroads and 94% on buses. That’s down from mask compliance rates that were between 98 and 100% in the earlier stages of the pandemic, Warren said.

But that figure began to decrease “as the COVID started to look better” early in the summer, Warren said.

“We can and must do better if we are going to beat the virus,” he said.

The concerns over mask wearing have reemerged as the transit system has repeatedly set pandemic-era ridership records after Labor Day. More than 3 million passengers took the subway on Tuesday, only the third time that ridership has topped that mark since March 13, 2020, when there were nearly 3.5 million riders.

With more students and municipal workers returning to the transit system this month, officials are making a renewed push to boost mask compliance amid the spread of the highly-contagious Delta variant of COVID-19.

MTA officials said that, starting Thursday, riders who do not follow the mask mandate will be more likely to face fines. Since September 2020, only 41 $50 fines have been issued throughout the MTA, including Metro-North and the Long Island Railroad.

In contrast, as THE CITY reported earlier this month, Transport for London issued approximately 4,370 fines, starting in July 2020.

“Make no mistake, if you refuse, you can expect to face a $50 fine,” said Joseph McGrann, acting chief of the MTA Police Department, which patrols the commuter rail system, along with Grand Central Terminal and Penn Station.

Neither the mandate to wear masks in underground stations and on trains, nor the possibility of a fine, had any effect on Hakeem Shaheed, who kept a face covering in his left hand while waiting for a train at the Bowling Green station in Lower Manhattan.

Several riders said they have not seen much in the way of mask enforcement by police, but MTA officials said volunteers with the agency’s Mask Force have handed out more than 800,000 free masks across the transit system since July 2020.

“I definitely haven’t seen anyone enforce it, including the police,” said George Wang, 43, who was waiting for a train at Bowling Green.

Over the course of the pandemic, more than 170 MTA workers have died as a result of COVID and hundreds have been harassed or assaulted for asking riders to cover their faces while in the transit system.

“We know this is what our customers want, they told us that they feel safer when they see their fellow customers wearing masks,” Warren said, “It’s the ultimate sign of respect.” 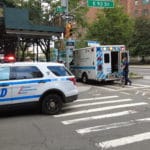