MANHATTAN – Despite being in service for just over five years, parts of the Second Avenue subway line are already in rough shape— from large cracks in the concrete ceilings at some station entryways to the chronically broken escalators at the East 72nd Street Station. Now, Council Member Julie Menin is demanding the MTA step up and make the necessary repairs.

“Despite being in the top ten percent of all stations in ridership and part of the newest line in the New York City Transit System, the 72nd Street Station has had endemic escalator malfunctions,” said Council Member Menin.

One escalator, at the south end of the station by East 69th Street, has been out of service since February according to the council member— leaving only one functioning upward escalator and causing bottlenecks during rush hour, making it particularly difficult for disabled Upper East Siders to get out of the station.

“This escalator continues to serve as a safety hazard, an accessibility issue, and as an impromptu trash receptacle,” Menin said Sunday.

The Council Member’s Office says it has repeatedly contacted the MTA over past few months to get the escalator fixed— but the transit agency keeps pushing back their own timeline for repairs.

First the deadline was pushed back from March 31st to April, then moved again to May 1st— some MTA signs were scribbled over as the escalators mechanicals remain exposed, accumulating garbage tossed by commuters.

“The MTA can no longer fail to meet its own deadlines and must fix this escalator immediately,” said Menin.

“It is unacceptable that a critical escalator at this station has been out of service for almost three months and that the MTA has continued to push back the repair date,“ the council member added.

Menin wrote a letter to MTA Chair Janno Lieber this weekend calling for urgent repairs— pointing to a number of complaints from frustrated straphangers.

“[It’s] an ugly eyesore and huge inconvenience for the public,” one neighbor wrote to Menin’s office, “UNNECESSARY and symbolic of a poor job by our city to maintain our system.”

Broken escalators have been a chronic issue in the Second Avenue Subway stations since it opened in 2017.

During the first fifteen months the line was open, inspectors with the MTA’s Inspector General’s Office found that only three of thirty-two escalators were in service at least 95.2% of the time, the agency’s goal up-time.

“Accessibility within the transit system is a top priority at the MTA and ensuring that escalators are operating in a safe manner is an essential part of that mission,” said MTA Spokesperson Meghan Keegan.

Upper East Site has learned that supply chain issues have caused delays getting parts for the repair, however, the MTA now says the escalator is expected to be back in service by May 8th. 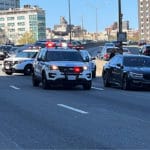