Heart-stopping video obtained by Upper East Site shows FDNY crews perform a life-saving rescue twenty stories above Manhattan, after a fire erupted in an apartment building located at 429 East 52nd Street near First Avenue in Midtown East that officials say was sparked by an e-bike battery just before 10:30 am Saturday morning.

“You saw the life-saving rope rescue,” said FDNY Chief Frank Leeb. Citywide Top Commander, briefing reporters after the the all clear was given.

“That is a last resort in the FDNY. We rescued two civilians from the from the fire apartment,” Chief Leeb added.

The harrowing rescue, caught on camera by stunned onlookers assembled near the corner of East 52nd Street and First Avenue, came as the two residents hung out of the window of their burning apartment, where an e-bike battery exploded into a fast-moving fire.

“The lithium ion battery adds a different degree, when we talk about the the fire dynamics of it. These rooms flashover in just a mere matter of seconds,” Chief Leeb explained, adding that the fire consumed everything between the front door and the windows — where the two residents were hanging for their lives.

“The fire apartment itself particularly in the area of the windows … all the way up to the door is pretty heavily damaged,” Chief Leeb added.

“We believe the occupant was repairing bikes in the building and the fire was right behind the front door, said Chief Fire Marshal Dan Flynn.

“We recovered at least five bikes from this apartment,” Chief Flynn added.

In video taken before the FDNY rope rescue that was shared with Upper East Site, both residents of the unit that caught fire could be seen clinging to the 20th floor window as a fire consumed their apartment — the thick, choking black smoke billowing around them from their windows.

At one point you can see the two figures reach out as if to try to hold each others hands before they are obscured again by smoke.

Officials said some some residents of the building living above the 20th floor fled their apartments for the roof, which is the opposite of what should be done in a fireproof high-rise building.

“It’s critically important that you listen to what the [911 dispatcher] is saying. Sheltering in place [and] closing your door saves lives. I can’t stress that enough. This is not a wood frame building,” explained Chief Leeb.

A total of 38 people were injured in the fire, including two critically and five seriously, officials said. The rest are said to have suffered minor injuries.

The condition of the two residents rescued by rope was not clear Saturday afternoon. 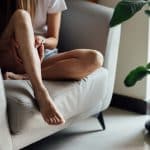 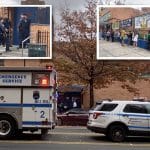