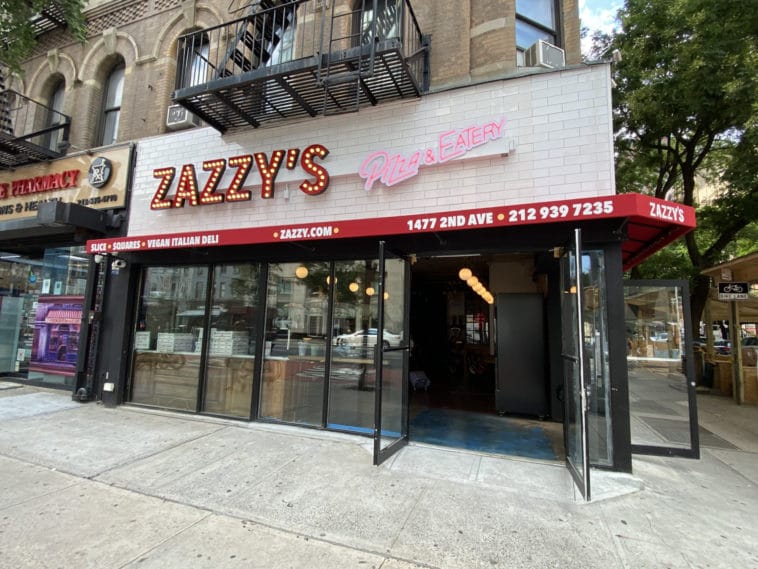 The grand opening is still more than a week away, but today Zazzy’s Pizza + Eatery opened its doors at the corner of East 77th street and Second Avenue in Lenox Hill to anyone craving a fresh, hot slice of pizza.

Zazzy’s is the new kid on the block, but the mission to bring the pizzeria here began close to a year ago— the passion project of founder Jon Gabel, who gave us a tour of Zazzy’s Upper East Side shop today as well as it’s sister restaurants— still under construction— next door, SNOB (Sophia’s Natural Organic Bowls), and the highly-anticipated plant based bakery Innocent Yesterday, Guilty Today.

The inviting interior of Zazzy’s has custom pillows lining the seating against the wall— and in the back a highly instagrammable installation featuring a wall of flowers and a neon sign reading ‘You wanna pizza me?”

On the outside, Zazzy’s is building out a festive dining area on East 77th street. More than just a place to eat a slice, Jon says the patio is meant to be a gathering place where Upper East Siders can come to watch a game on one of multiple televisions that will be inside the structure once complete.

Today’s soft launch only includes Zazzy’s, which is operating with a limited menu right now— but still offers the basics in both traditional and plant based options. The Italian deli isn’t open just yet, but some of their offerings are already available in refrigerated case, including the vegan sausage and broccoli rabe rigatoni, which we can confirm is delicious.

Today, we taste-tested a slice of Zazzy’s and we now understand why the founder confidently tells everyone they have the best pizza.

Crispy and chewy in all the right spots, the slice is thin and perfectly cooked— the zesty tomato sauce and and generous mozzarella on top is reminiscent of the small pizza’s you’ll find at authentic Naples-style Italian restaurants— but this won’t break the bank.

A regular slice with a crispy basil leaf on top will set you back just $3, on par with other local pizza shops, with a vegan slice costing $5.

Upper East Site also learned more today about what we can expect from Innocent yesterday— which features a working fireplace inside the warm and welcoming space still under construction. It features a take out window for ice cream— traditional and vegan— both hard and soft serve.

The vegan soft serve at Innocent Yesterday has a creaminess often absent from plant based frozen desserts. There’s a special treat that caught our attention though— vegan hot chocolate with homemade vegan marshmallow squares, and more importantly the milkshake-like frozen vegan hot chocolate.

Outside the bakery, the dining area on 77th street is unlike anything around the city— the owner spared no expense, telling Upper East Site it’s built sturdy with a steel frame encased with wood.

The roof, made of crystal clear acrylic is a pricier material but gives the space a feeling of openness— and after dark will give a beautiful view of the stars.   The outdoor dining area in front of SNOB will include a feature that’s sure to draw customers— two swings will be installed inside the patio for guests to sit on and relax.

More than just a series of restaurants, it’s clear the Zazzy’s trio will become a destination on the Upper East Side. 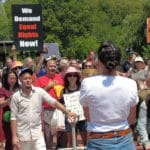