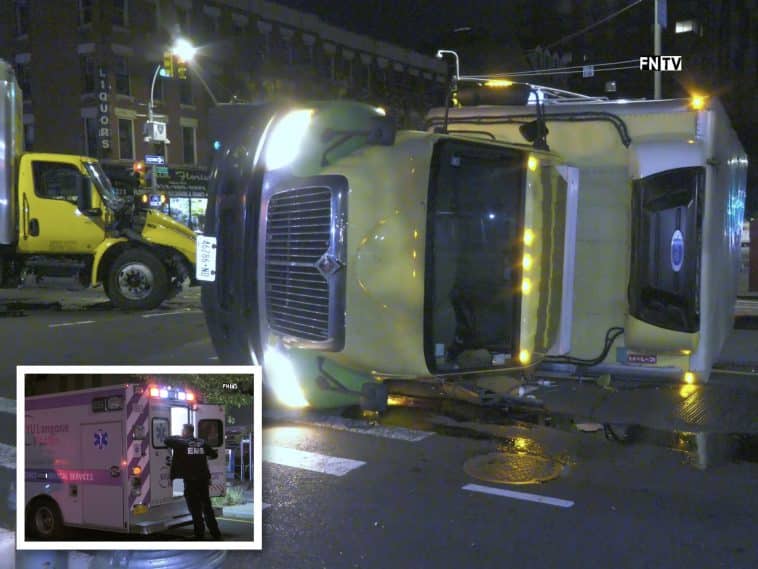 A violent collision early Thursday morning on the Upper East Side sent a large refrigerated box truck tumbling over — flipping over a concrete bollard and onto the median of East 86th Street, injuring the truck’s driver and blocking the roadway for hours.

Investigators say it was around 2:00 am when the two trucks crashed at the intersection of East 86th Street and First Avenue.

“I heard a loud bang. ” said Ryan, a neighbor who spoke to our news partners at FreedomNews.tv.

“I came out onto the fire escape [and] saw a bunch of lights flashing lights. Came out here and discovered his truck was flipped.”

Officers arrived to find the white box truck overturned on its side across 86th Street just east of First Avenue while a yellow Penske rental truck with a smashed front end was stopped in the intersection.

It’s not clear how the crash unfolded, however, the overturned white box truck appeared to have damage in the middle of the vehicle on the passenger side, possibly t-boned by the driver of the yellow Penske truck as it crossed the Upper East Side intersection.

“I wouldn’t even guess it was gonna be something like that, as crazy,” Ryan said, “Honestly, I was just hoping that it wasn’t like a shooting or something.”

The NYPD’s Emergency Services Unit could be seen using chains attached to their police trucks, unsuccessfully trying to upright the overturned vehicle, which blocked both the eastbound and westbound lanes of East 86th Street for several hours overnight, as authorities waited for a heavy duty tow truck to arrive.

FDNY officials tell Upper East Site that two people were transported to Weill Cornell Medical Center for care — police say one of those hurt was the driver of the white refrigerated truck, who suffered minor injuries in the crash. 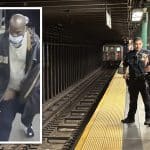