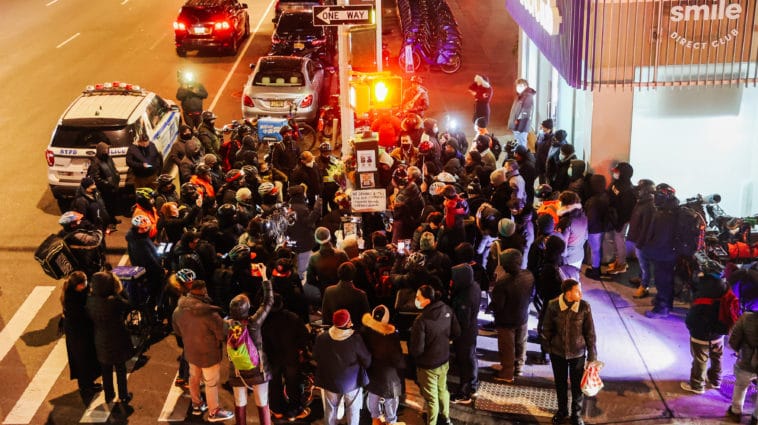 Vigil for Taurino Rosendo Morales, 37, and Delfino Eduardo Maceda, 46, killed after being run down by a box truck on Christmas Eve/Adrian Childress, @weunfucktheworld

MANHATTAN – Dozens of friends, loved ones and even strangers turned out Sunday night for heartfelt memorial at the corner of East 61st Street and Third Avenue, the Upper East Side intersection where two men were tragically killed on Christmas Eve when they were run down by out-of-control box truck.

Close to one hundred mourners gathered around a makeshift memorial to remember Taurino Rosendo Morales, 37, and Delfino Eduardo Maceda, 46– and to call on the City to do more to protect cyclists.

A handwritten sign written in all caps fixed to the memorial of flowers and photos of the men read ’WE DEMAND JUSTICE FOR OUR FALLEN COMRADES.’

As I have said before, we need to improve the safety of our intersections.

Across the City over half of all crashes happen at intersections. Since 2011, This intersection has been the site of 22 crashes according to City data. 23 total people have been injured here… pic.twitter.com/uJ9tm7esmR

Both men were killed just before 9:30 am Friday morning, when police say the 66-year-old driver of the Baldor Foods box truck suddenly drove forward on 61st Street, jumped the curb and struck a fire hydrant before hitting the two men— Rosendo Morales, a delivery worker on his bicycle in the street and Maceda, a construction worker standing on the sidewalk.

The two men, who police say both suffered severe trauma from being struck by the box truck, were rushed to Weill Cornell Medical Center where they were pronounced dead.

Incoming Department of Transportation Commissioner and current Council Member Ydnais Rodriguez paid his respects at Sunday’s vigil, offering his sympathy and support for the men’s families and all New Yorkers affected by traffic violence.

“Since 2011, this intersection has been the site of 22 crashes according to City data,” incoming DOT Commissioner Rodriguez wrote on Twitter.

“23 total people have been injured here… 14 were pedestrians, 6 were cyclists and 3 were drivers. A disaster waiting to happen.”

A GoFundMe started for Taurino Rosendo Morales’ family aims to raise enough money to bring 37-year-old’s remains back to his native Mexico— where his family still lives.

“Sadly, he left 2 children and his beloved wife in Mexico,” Taurino’s brother Pedro writes in the fundraiser, “they ask for your support so that he can soon arrive at their home.”

So far more than $11,000 has been raised through close to two hundred individual donations ranging from $5 to $1000.

A funeral was also held Sunday for Salvador Navarette-Flores. The 31 year old delivery worker, known to loved ones as Chavita, was killed on the Upper East Side less than two weeks ago when his moped crashed into an illegally double parked FreshDirect truck at the corner of First Avenue and East 76th Street  on December 13th.

So far this year, at least fourteen deliveristas— as they’re known— have been killed on the streets of New York City, according to Transportation Alternatives, a street safety advocacy group.

“My priority on day one as DOT Commissioner will be to increase pedestrian and cyclist safety by increasing the number of protected bike lanes,” Council Member Rodriguez promised on Saturday. 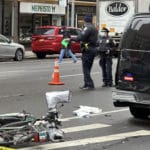 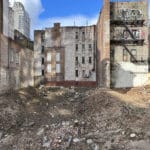