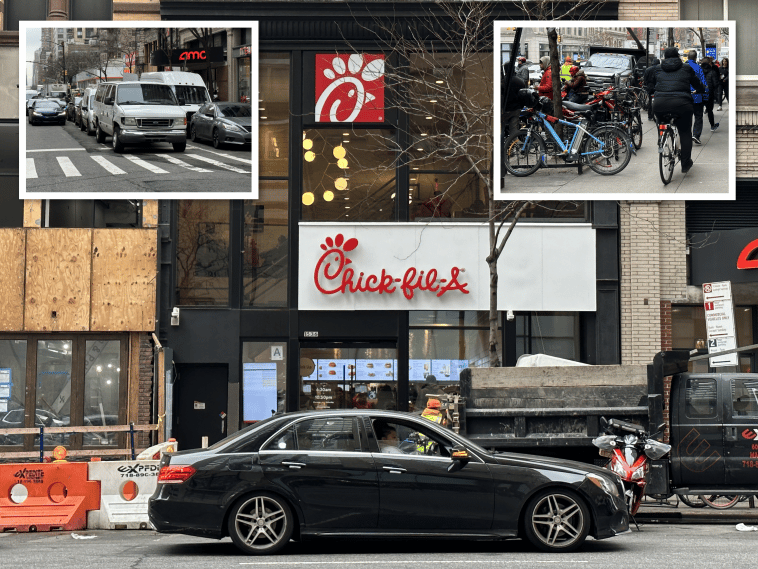 There’s still no solution in sight for the congestion caused by the Upper East Side Chick-Fil-A restaurant, where delivery workers still stage their ebikes and mopeds while drivers block traffic during order pickups, despite a yearlong effort by the franchise operator to rein-in the safety and quality of life issues caused by the restaurant.

“We removed all of our outside barricades to try to organize some of the stuff that was happening,” explained Chick-Fil-A franchisee Jared Caldwell — who operates the restaurant at 1636 Third Avenue  — giving an update on the Community Board 8’s Transportation Committee Wednesday night on the progress that has been made since the last time he appeared in December 2021.

“I’ve been pleasantly surprised,” Caldwell continued, “I wouldn’t say it’s orderly, but it hasn’t been a disaster by removing some of those barricades.”

Since opening at the corner of East 86th Street and Third avenue roughly three and a half years ago, the Chick-Fil-A restaurant has been hit with Upper East Siders, with lines stretching out the door and down the sidewalk some days.

ALSO READ | For Flex Mussels’ Owner, Bringing ‘Old New York’ Back to the UES is a Family Affair

Now, most days the sidewalks are filled with a crowd of Door Dash, Uber Easts and Seamless delivery workers hanging out on ebikes and mopeds waiting for an order to come in, while a block worth of double, triple and sometimes quadruple-parked cars with fake temporary paper tags or expired out of state plates idle outside while a driver runs in for an order pick up.

“We try to keep them off the sidewalks as much as possible,” Caldwell told the Transportation Committee, adding that they’ve “really focused on how can we … can we get [drivers] in, get them out, get them on their way — like clear out the area.”

Since last year, Caldwell worked with the delivery apps to receive orders more quickly, so they can get those drivers blocking traffic their delivery orders as fast as possible.

“Our turnaround times have been a lot better from that standpoint,” he added.

While the restaurant may be expediting orders more quickly, it has not made a visible impact on the congestion caused by the different groups of workers waiting to pickup delivery orders. Even crackdowns by the NYPD have not had any long-lasting effects, he says.

“Just another reminder: There are no fast food drive-thrus on the Upper East Side,” the NYPD’s 19th precinct wrote on Twitter after revisiting the problem last September, sharing a photo of an officer standing in front of the restaurant on Third Avenue ready to issue summonses.

“There’s been some good stretches where it’s cleared some of that out,” Caldwell explained, “And it feels like the day after that happens, the [e-commerce] delivery trucks move in and then kind of commandeer the space for seven or eight hours. That kind of makes things even more congested than anything.”

Caldwell noted that he has put in a request for the Department of Transportation to install a bike corral in the parking lane in front of the restaurant, so they don’t get locked to tree beds or parked on the sidewalk, but says he’s done all he can do to alleviate the issue.

“We tried to work to do everything we can on our end to kind of push that ball down the field, Caldwell added, “congested and chaos is not what I want.”

Without any solution or at least any further ideas how to tackle the problem, following the meeting Upper East Site contacted Jared Caldwell to find out whether Chick-Fil-A has considered using only its own workers for deliveries or hiring security guards to coordinate traffic and parking outside the restaurant. 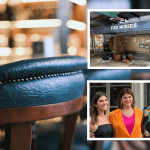 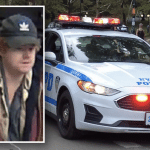