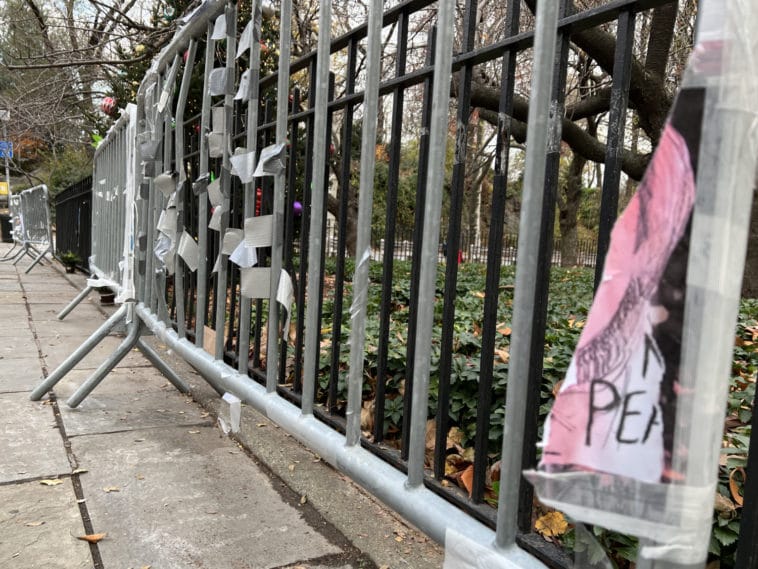 MANHATTAN – For 469 days, a memorial that pays tribute to victims of police violence has stood at the East 86th Street entrance to Carl Schurz Park— but the display, which includes messages, photos and details on the Black lives lost and remembered, has repeatedly become victim to hate from neighbors, who have repeatedly vandalized the memorial— even wiping feces on it. Now, the most recent despicable acts are the destruction of the memorial, three nights in a row.

Volunteers with UES for Black Lives Matter spent a half hour just after sundown Wednesday repairing the memorial— taping up photos of Breonna Taylor, the EMT who was shot to death by police in Kentucky, Eric Garner, killed by a police chokehold on Staten Island and signs with simple but important messages like ‘Say Their Names’ and ‘Staying silent about racist neighbors is a problem.’

“I’m a black woman so it’s very, it’s painful,” Coleman says, “to know that it’s a public park and people don’t want the fight there, or the education there, or the vigil there.”

On Tuesday night, volunteers say they repaired the memorial only to find it once again destroyed on Wednesday morning.

Organizers say this escalation comes on the heels of the Christmas tree being lit in Carl Schurz Park— the Black Lives Matter memorial sits to the right and left of the tree and for hate-filled racists who are unfamiliar with how to frame photos, the memorial could appear in the background.

UES for Black Lives Matter has hosted vigils at the memorial in the park— first on a daily basis before switching on weekends only— since the Summer of 2020.

It’s one of the longest running demonstrations since social justice protests swept the city following the murder of George Floyd, an unarmed black man, by a police officer in Minnesota.

In that time, the memorial has been a beacon of hope and pride for some neighbors on the Upper East Side— but others say, it’s time for the display to go.

“I’m generally a supporter of efforts to reform the police,” one neighbor who wished to remain anonymous told Upper East Site.

“I’m also against leaving a bunch of disorganized crap in a park for over a year… maybe we should just have our nice park back.”

At this point, organizers have not filed a report with the NYPD, though they tell Upper East Site that is the next step for them— as police surveillance cameras that line East End Avenue near Carl Schurz Park could help identify the hate-filled vandal.

“I wish an honest dialogue were possible,” that same anonymous neighbor told us, “but the specter of being called racist because I don’t like garbage in our park looms large.”

It’s worth noting, that the display appears orderly and well-kept by UES for Black Lives Matter— except at times when its been vandalized, smeared with feces or torn down.

“[The vandals] need to understand that this is not acceptable,” Coleman told Upper East Site.

“This is 2021, black people are still dying— unarmed people at that— by police.” 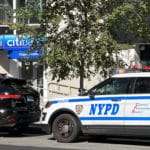