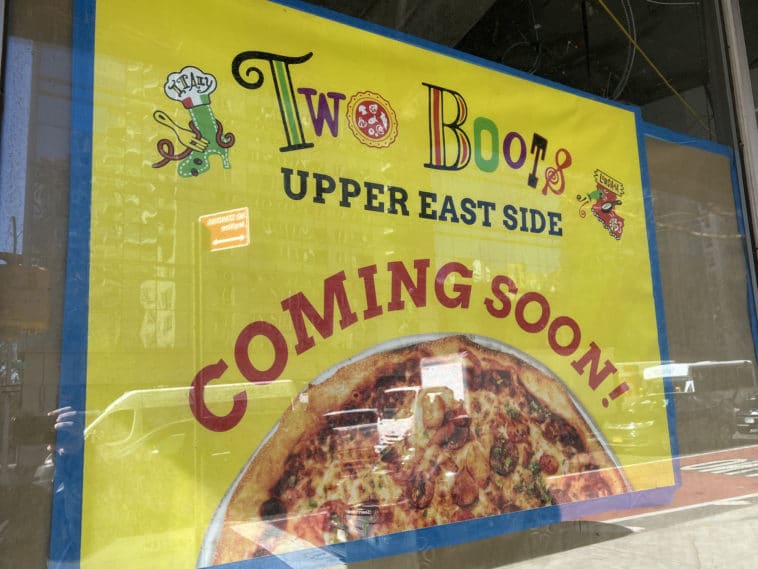 MANHATTAN – An old Upper East Side favorite for pizza is coming back to the neighborhood in a big way after a long hiatus. Two Boots pizza is planning to open a new shop in Lenox Hill nearly four years after their Yorkville shop closed down.

Two Boots’ new location on the Upper East Side is set to open at the northwest corner of East 65th Street and Second Avenue, in the space formerly belonging to Fellan Florist, which has been vacant since 2020.

Last summer, Winick Realty Group announced Two Boots had signed a lease for the pizzeria at 1243 Second Avenue, and this just month, ‘coming soon’ signs were spotted in the windows, announcing their big return to the Upper East Side.

If you’ve lived in the neighborhood a while, you probably remember Two Boots colorful yellow sign above their longtime pizzeria at the southwest corner of East 84th Street and Second Avenue.

At the time, Two Boots was one of the few pizzerias in the neighborhood to offer vegan pizza, starting with the ‘V for Vegan.’ Introduced in 2011, it features artichokes, red onions, shiitake mushrooms, sweet red pepper pesto, basil pesto and Daiya non-dairy cheese.

That Yorkville location would close down in 2018 and eventually become a Williamsburg Pizza.

An early adopter in the vegan pizza space, the number of plant-based pies at Two Boots has grown to nine— including vegan versions of their the Mr. Pink and the Cleopatra Jones.

Even the name ‘Two Boots’ is derived from the Cajun-Italian fusion, and the the boot-like shapes of Italy and the state of Louisiana.

It’s not yet clear when the new Two Boots pizzeria will open at East 65th Street and Second Avenue on the UES, but if you cant wait you can head down to the closest shop, located in the East Village.

Upper East Site has reached out to the company for more information and is waiting to hear back. We’ll update this article accordingly.