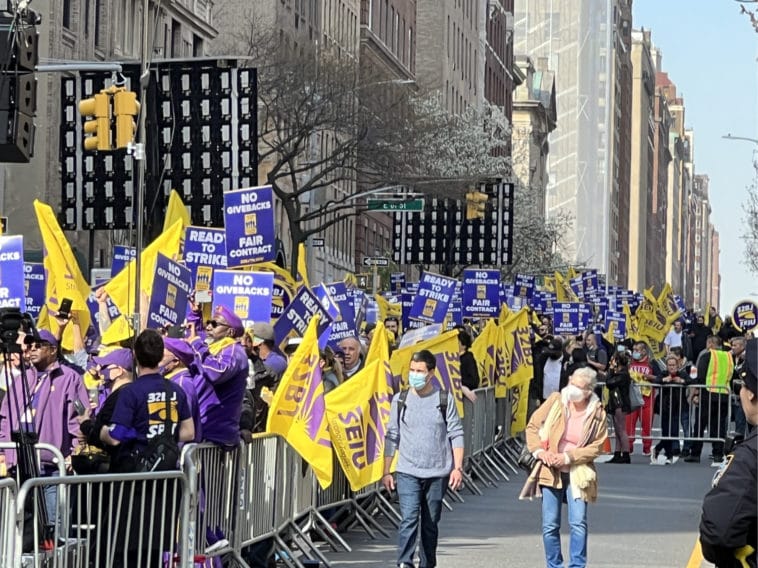 MANHATTAN – A stretch of Park Avenue southbound between East 79th and 84th Streets was shut down Wednesday afternoon as thousands of doormen, maintenance workers, cleaners, superintendents and their supporters flooded the Upper East Side street for a demonstration in their fight for a fair contract that would avert a possible strike next week.

Late Wednesday afternoon, the union voted to authorize a strike when their contract ends— meanwhile, the main sticking points on a new contract with landlords are over fair wage increases and health care costs.

Under their current union contract, doormen, porters, concierges and other residential workers represented by 32BJ in an estimated three-thousand buildings citywide receive health care benefits for their family that are fully-paid by their employers.

They’re fighting to keep it that way.

Governor Kathy Hochul— who on Monday was endorsed by 32 BJ in her race for a full term as governor— joined the Park Avenue rally to voice her support for the residential building staffers.

“You remember during the pandemic a lot of people zoomed into their jobs in their pajamas at home off somewhere far away– who showed up every single day?” Governor Hochul asked the crowed.

“You showed up. You had our backs. You were there when we needed you and they call you essential workers. That sounds nice, but if you’re that essential, why don’t we pay them what they deserve,” Hochul added.

Joining the doormen, maintenance workers, porters, cleaners and other residential staff in their demonstration will be union members from up and down the east coast, who are traveling to the Upper East Side to help their comrades demand a new contract.

“I fully support [the union] in their fight for a fair contract!” said Upper East Side City Council Member Julie Menin.

“These workers are essential workers and we need to stand by them to demand proper pay and health care,” she added.

“New Yorkers depend on the tireless work of Residential Workers everyday,” said Council Member Keith Powers, who also represents the Upper East Side.

Landlords across the city have begun sending letters and emails to tenants warning of the effects of a residential worker strike— including an interruption of package deliveries and the suspensions of move-ins and move outs. 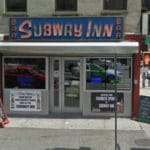