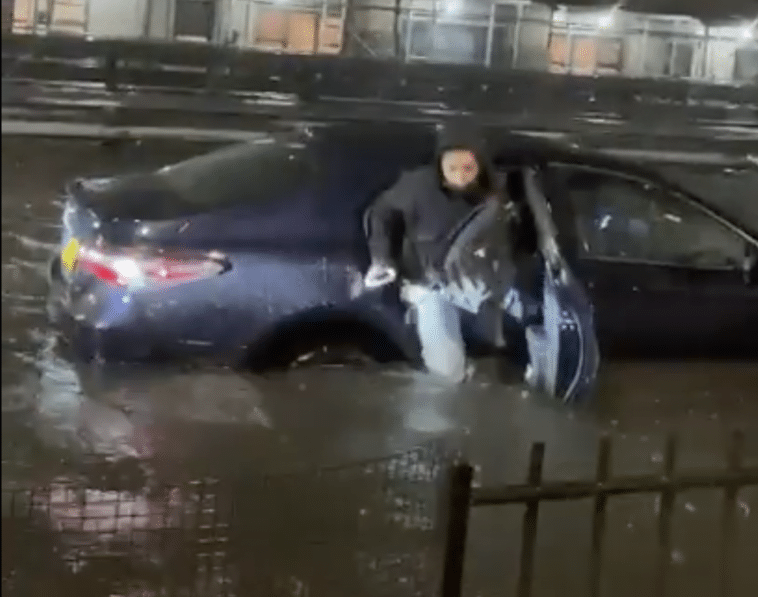 MANHATTAN – During the height Wednesday night’s monster storm, a passenger abandoned their waterlogged and floating rideshare on the FDR drive near East 79th Street on the Upper East Side, which looked like an overflowing swimming pool with waves spilling and splashing over the concrete barriers separating the highway from the East River Esplanade.

“We’re here today because of a devastating storm that shocked the people of this city,” Governor Kathy Hochul said at a news conference in Queens with Mayor de Blasio this morning. “Even the morning after, we’re still uncovering the depth of the loss,” she added.

“We saw a horrifying storm last night, unlike anything we’ve seen before. And this is a reality we have to face,” the Mayor said announcing nine New Yorkers lost their lives in the storm.

Here on the Upper East Side, video taken from the East River Esplanade last night shows car after car trying to drive through water that is at least three feet deep— the SUV’s mostly make it through without issue, including a police Suburban which cruised through rough floodwaters like a weekend boater easing their way through a no-wake zone.

Next up, a rideshare Toyota Camry tries to make the same move— but lacking the height advantage and four wheel drive, it immediately begins floating, creeping forward. When the wheels touch solid ground moments later, a passenger hops out wet and shaken in what must have been a harrowing experience.

Choppy floodwaters created treacherous conditions, forcing police to close the highway to traffic around 10pm last night through the morning, due to the high water and abandoned vehicles littering the roadway.

In the same area, video shot from an apartment along the FDR Drive gives us another vantage point of the catastrophe that unfolded as a result of the unrelenting, pounding rain that drenched Central Park, bringing more than three inches in one hour just before 10pm Wednesday night.

One driver found themselves outside their car, standing knee deep water in the pounding rain after driving into flash flooding one block south near East 78th Street.

That drive, along with a passenger could both be seen pushing the small red car in an attempt to move the disabled vehicle after stalling out in the high water.

The NYPD says if your car died in floodwaters on a highway or city street to contact 311 to find out where it’s been towed. A tow truck drive that spoke to Upper East Site revealed that three waterlogged cars— one a small SUV— been removed from the 79th Street Transverse.

Video taken from inside an Uber driving through one of the Central Park transverses shows cars floating in the flood waters– a terrifying situation to be in and the exact reason why experts warn that when you encounter flood waters: turn around, don’t down.

Submit your storm videos through our partners, Spot News? Get Paid. 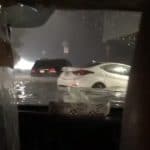