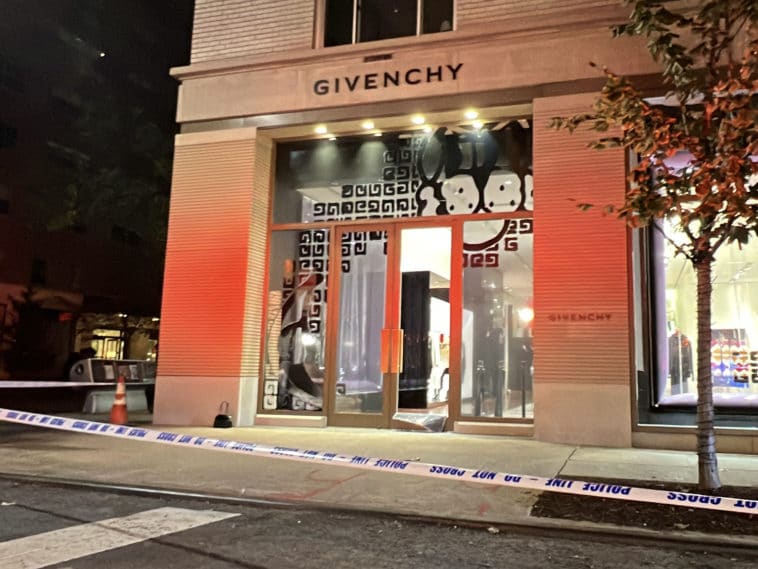 MANHATTAN – While most of us were sleeping, a team of nocturnal criminals was wide awake— smashing their way into Givenchy store on Madison Avenue at East 65th Street on the Upper East Side at 4:46 am Wednesday, police say, to pilfer pricey purses worth more than $79,000 in the cover of night.

The shattered glass of Givenchy’s front door lays on the sidewalk, as did the hammer that one of the ten to fifteen suspects investigators say used to break the glass and force their way inside to grab 39 high-end handbags, some costing more than two-thousand dollars each– as well as two women’s ‘ready to wear’ pieces of clothing.

Two of the pricey purses didn’t make a clean getaway with the gang of crooks— left behind in their rush to escape the crime scene as fast as possible.

One luxury Givenchy bag sat near the broken glass of the front door— another in the street, its buckle broken and the security tether curled up next to it like a tail— the end frayed where it had been ripped out of the wall.

Inside, parts of the store had been ransacked, with some merchandise seen on the floor— and an empty shelf nearby.

It’s not clear if employees were in the store at the time of the robbery and investigators say say there were no injuries reported— though two ambulances were parked outside the store.

FDNY officials do confirm to Upper East Site one person was taken to Weill Cornell Medical Center after ‘feeling sick.’

This type of smash-and-grab robbery on Madison Avenue is not unheard of— and typically happens in the early morning hours when the streets are quiet.

In July, a 3:30 am robbery at the Dior store at the corner of East 59th Street and Fifth Avenue ended with the theives being scared off by store security.

Last January, the Balenciaga store on the Upper East Side was targeted in a 3:00 am smash and grab.

Police say the total value of the items stolen in this mornings robbery is $79,675. 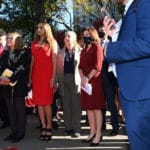