MANHATTAN – The depraved sexual deviants who prowl our subway system for victims have turned yet another unsuspecting woman into an unwitting survivor of sexual abuse— the latest victim was targeted by a pervert who assaulted her on a train passing through the Upper East Side.

Police say it was 7:25 am on a Tuesday morning, September 14th, when the 39-year-old woman says she was violated on a southbound (4) train by a creep who came up behind her and rubbed his privates into her rear end as the express train headed from 125th Street— where she got on— and East 59th Street, where she got off to escape the pervert who preyed on her during the morning rush.

ALSO READ: Another Woman Groped as Subway Sex Crimes Surge on the UES

On Friday, police released clear surveillance video from inside a subway station— it’s not clear which one— showing the suspected sexual predator lurking on the platform, then quickly spin around with a menacing glare and shuffle forward, lumbering towards something off-camera with purpose.

This latest case of sexual abuse is the sixth subway sex crime since June publicized by the NYPD in efforts to track down the suspect. If it feels like there has been a concerning uptick in sex crimes in the subway, here’s what the data shows— sexual assaults excluding rape are up nearly fifty percent on the Upper East Side year-to-year, outpacing the city average near twenty-five percent.

Those figures paint a disturbing picture, however the data also shows that on the Upper East Side subway crime is down fifty percent overall. Based on an analysis of the NYPD CompStat data, it appears in our precinct there is less crime on the subway, but of the crime that is happening, more incidents are of a sexual nature.

Police say the suspect is a man in his mid-40’s, about 5’6” tall with black hair and a beard— however, it is worth noting that the man is balding as well. He was last seen wearing a blue jacket, grey shirt, black pants and black boots.

If you recognize the suspect in this surveillance, please contact NYPD Crime Stoppers at 1-800-577-8477. You can remain anonymous. 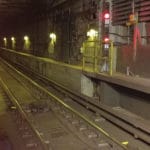