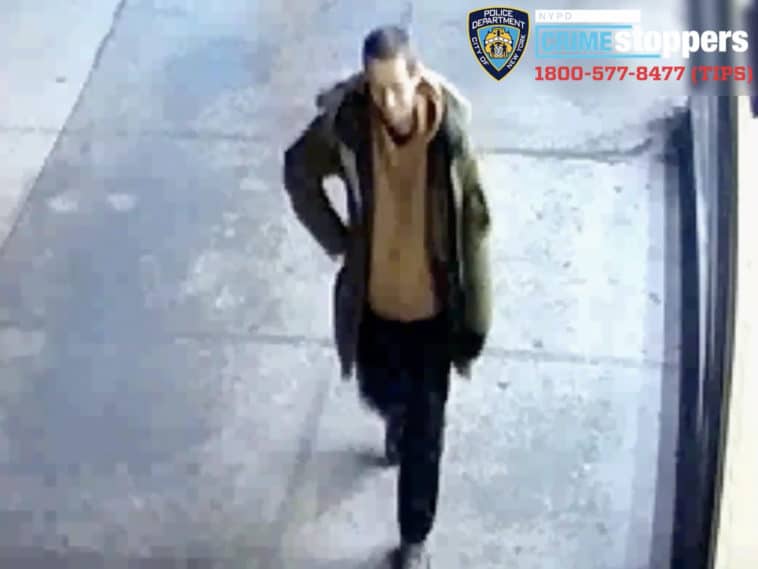 MANHATTAN – Investigators have just released new surveillance video of the suspect wanted for a disturbing vandalism spree that left more than a half dozen cars on the Upper East Side covered with antisemitic graffiti earlier this year.

As Upper East Site previously reported, it was early in the morning of Wednesday, February 16th, around 4:30 am, when a single suspect was caught-on-camera defacing cars parked near East 69th Street and Fifth Avenue in Lenox Hill.

The hate hate-filled graffiti rampage lasted an hour, targeting seven cars and SUVs over the span of several blocks.

In previous surveillance video released by the NYPD, the suspect was seen spray-painting a zig-zag design over the wheel wells of a parked white SUV.

Friday afternoon, detectives released new video showing the suspect, described as a man wearing a green parka, brown hoodie and black jeans, walking down a sidewalk– however, because of the poor quality of the video, the man wanted by police is still difficult to make out.

This case of antisemitism is under investigation by he NYPD’s Hate Crimes Task Force— a citywide team that tackles bias incidents across the five boroughs and brings suspects wanted in hate-motivated crimes to justice.

If you recognize the man seen in the surveillance video or have any information regarding this antisemitic vandalism spree, you’re asked to call NYPD Crime Stoppers at 1-800-577-8477.

All calls are strictly confidential.