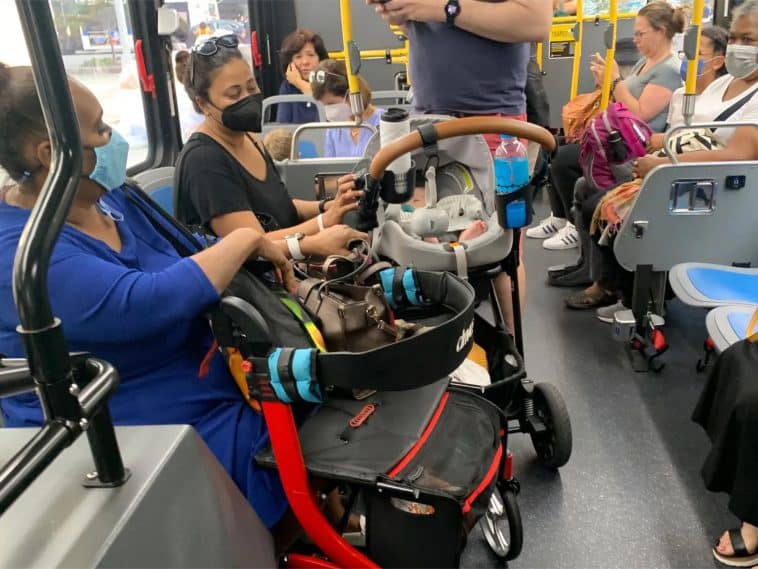 This article was originally published on Sep 16 12:15pm EDT by THE CITY

The MTA is taking stroller-only sections for a test drive on some bus routes, THE CITY has learned — but without turning space prioritized for wheelchair users over to baby carriage-pushing parents.

As part of a test along seven routes, an MTA source confirmed that the transit agency plans to remove one or two seats from older buses and designate sections of newer buses equipped with side-by-side flip-up seats for parents and caregivers with strollers.

“This is a good, good, good, idea,” said Catherine Joseph, a nanny, as she stepped off an M31 bus with a child in an unfolded stroller at York Avenue and East 74th Street. “It is an overdue one.”

The rollout of the pilot program — which MTA officials plan to detail at Monday’s committee meetings — follows a campaign earlier this year from parents who urged the transit agency to revisit its ban on open strollers aboard city buses.

“You have to fold the stroller up, that’s the issue, and it really discourages mothers from using the buses,” said Danielle Avissar, a Manhattan mother of a 20-month-old. “It’s a lot to handle and it’s really not fair because we don’t feel welcome on buses.”

Avissar was among several parents who pressed MTA officials for space on city buses at agency board meetings earlier this year.

“Some people opt out from taking the bus completely,” said Christine Serdjenian Yearwood, a mother of three and founder of UP-STAND, which advocates for pregnant people and parents on public transportation. “That’s true for me when I have the stroller.”

But the campaign stirred up some bus riders with disabilities, including one man who said at a board meeting, “Just fold the damn stroller up and deal with it!”

In response, transit officials in March put together an advisory group of parents that included Avissar and Yearwood, bus drivers and advocates for people with disabilities following fears that bus space marked as “wheelchair priority seating” would be turned over to strollers.

According to an MTA source, more than 140 buses in the pilot program will have stroller decals displayed near doors, as well as above designated carriage zones. The transit agency has close to 5,800 buses in its fleet.

Advocates for people with disabilities had noted that stroller pushers sometimes take up their reserved spots, but transit officials say the new plan won’t take any space away from wheelchair users.

“I’ve had people literally want to come to blows with me over a space that is required for people like me,” said Dustin Jones, a Manhattan wheelchair user who was part of the advisory group. “So I am happy that we are not losing any [Americans with Disabilities Act] accessible seats.”

Sources told THE CITY that the bus routes where the new layout will be tested are:

“Every neighborhood is going to respond to this differently,” Avissar said. “It’s a step in the right direction.”

But officials with Transport Workers Union Local 100, which reps bus operators, said they are not on board with the baby push because of concerns that the updated layout could lead to disputes over seats reserved for strollers, potentially forcing drivers to keep the peace.

“These situations could get ugly very quickly,” said Donald Yates, a TWU representative for Manhattan and The Bronx, told THE CITY. “Bus operators are enduring far too many assaults already and we don’t need to throw gasoline on the fire.”

According to MTA statistics, bus operators have been assaulted 36 times this year and subjected to more than 1,000 instances of harassment from riders.

Union leaders said they also worry about strollers potentially tipping over while a bus is on the move.

An MTA spokesperson noted that six bus operators were part of the group that developed the pilot program.

“We are confident it will make riding the bus easier for parents and caregivers with strollers without compromising safety,” spokesperson Eugene Resnick told THE CITY. “The pilot experience will be reviewed periodically to determine whether modifications would be useful.”

‘Giving It a Shot’

Studies have pointed out that as strollers have increased in size, the problem of accommodating them has grown, leading some transit agencies to remove a row of seats from buses to make room.

Barbara Graham, 82, who was waiting for an M31 at York Avenue and East 71st Street, said she sometimes gets into it with new parents.

“I tell these mothers, ‘I’m sorry, I am a mother and a grandmother, but you’ve got to collapse the stroller,” she told THE CITY. “Sometimes they do it, sometimes they can’t.”

Advocates for those with strollers and for riders with disabilities acknowledged that the debate over space on buses is a delicate issue.

“I’m hoping not too many issues arise,” Jessica Murray, who chairs an MTA advisory committee on transit accessibility, told THE CITY. “You can’t really know for sure until you try it, so I am glad the MTA is giving it a shot and not just saying no.” 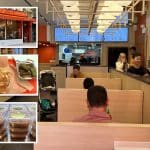 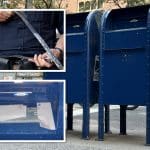