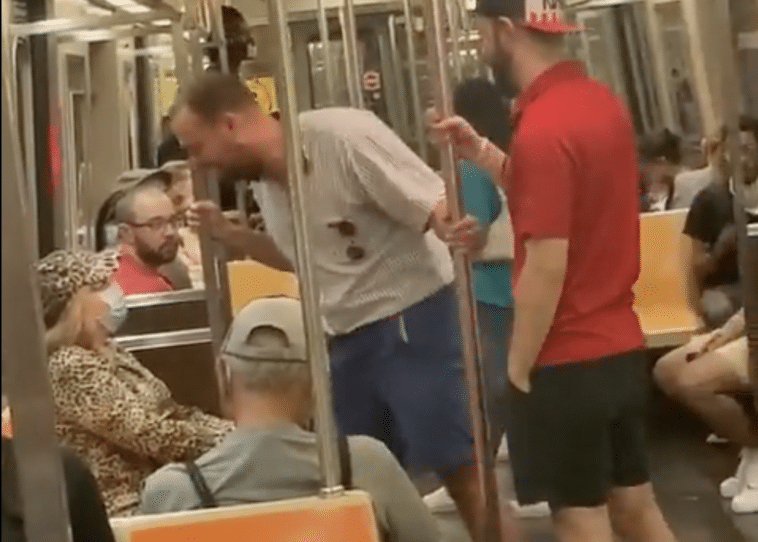 MANHATTAN – A maskless, unhinged man is seen trying to intimidate straphangers, including an elderly woman, on a subway train– after leaving an anti-vaccination march on the Upper East Side– in a disturbing new video posted to Twitter.

“I wish the police would come and give you a $50 fine,” the woman says to the maskless man as the video from inside a Q train Sunday night begins.

“I’m so afraid!” the man says back in a mockingly high-pitched voice while aggressively leaning over the seated elderly woman.

A second maskless man who appears to be traveling with the unruly passenger sits down as the first begins shouting.

We need to find out who this guy is and where he works because this was absolutely unacceptable. Unhinged #antimasker #Antivaxxer bullied an elderly woman on the #subway #NYC today. pic.twitter.com/vGHfPn30Kk

The maskless man chants the year the Declaration of Independence was signed, before he getting uncomfortably close to the elderly woman and shouts for her to sit down.

Told by other passengers to respect his elders, the disturbed man replies.

“Do you know what I respect?” the maskless man asks the person recording the video.

“I respect freedom,” he declares, answering his own question.

Then the unhinged straphanger tells them to “take a seat.”

“Sit down. Sit the fuck down,” the unhinged man commands as he stares down the camera.

“Thats right,” he says in a satisfied way as they move away.

Photos posted to Twitter show the unhinged man and his red-shirted companion at the anti-vaccination mandate march at Gracie Mansion earlier Sunday evening.

“The transit system is not the place for a debate on masks,” the MTA said in a statement to Upper East Site calling out the maskless man’s bad behavior.

“Mask-wearing is an MTA regulation and is respectful. Respect also means refraining from harassment and verbal abuse and not being an obnoxious jerk while violating rules that keep New Yorkers and transit workers safe,” the transit agency added.

In response to an inquiry by Upper East Site, the NYPD said it’s aware of the disturbing video, but has not yet received any complaints. 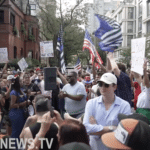 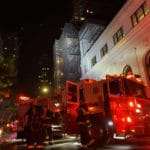