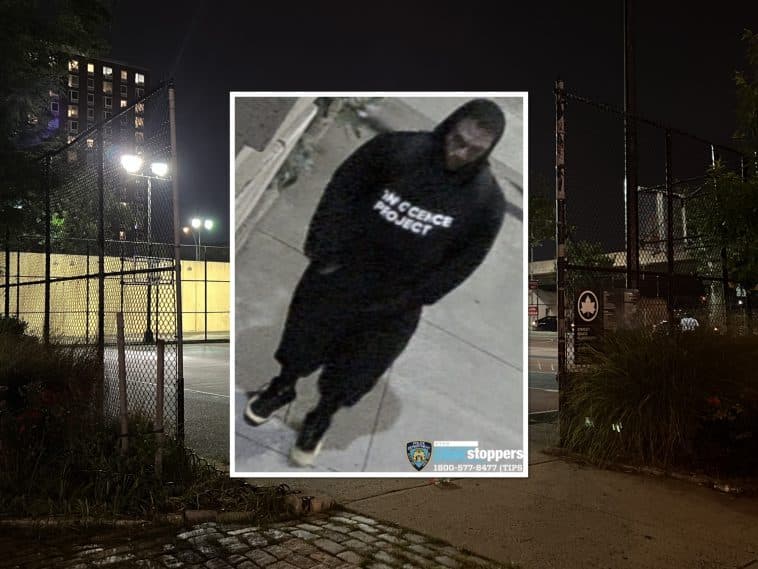 The armed and dangerous maniac who killed one homeless man and wounded two others– stabbing the men while they were sleeping— used what is described as a ‘large kitchen knife’ in the the cold-blooded attacks that have stretched from the West Village to an Upper East Side playground.

“We need to get this killer off our streets as quickly and as safely as possible,” said NYPD Commissioner Keechant Sewell, briefing reporters at One Police Plaza Tuesday afternoon.

The bloodshed began just after 3:00 am on Tuesday, July 5th, when detectives say the suspect approached his first victim, who was sleeping on a bench near West Street and Christopher Street in the West Village.

The killer, who was wearing a sweatshirt for the Innocence Project— a group that works to exonerate the wrongfully convicted— didn’t initially attack the sleeping victim. Instead, police say he took the 34-year-old homeless man’s Citi Bike.

“The bike was laying next to our victim,” said NYPD Chief of Detectives James Essig.

“He picked it up, rode around the block a few times, then drops it off.”

Once the suspect returned, he plunged his knife into the first victim’s stomach, according to police. The man made it across the street and a passer-by called 911, police say. He was rushed to Bellevue hospital but died of his injuries.

Police revealed the suspect stole the 34 year old’s backpack, but ditched it a short distance away from the scene of the stabbing— detectives would not comment on whether there were fingerprints on the bag.

Two days later, on Friday, July 8th around 10:00 pm, police say the killer stalked his next victim for a half hour, watching the 59-year-old homeless man as he slept alongside a building near the corner of East 49th Street and Madison Avenue in Midtown.

After watching his second victim from the bench, police say he put on a Covid mask, snuck up on the sleeping man and stabbed him in his belly— the NYPD says the entire crime was caught on camera.

The second victim tried to treat the stab wound himself, but investigators say he eventually ended up hospitalized at Weill Cornell Medical Center in stable condition.

Finally, around 3:30 am Monday morning, police say the serial stabber— who wearing his Innocence Project shirt once again— preyed upon another sleeping homeless man, this time at an Upper East Side playground.

“We’ve been tracking him. We think he’s might have been using the subway,” said Chief Essig.

Police say the third victim was a 28 year old who was sleeping on the basketball court at the Stanley Isaacs Playground on First Avenue between East 95th and 97th Streets.

After waking up to knife wound to his gut, the homeless man chased the killer, but couldn’t catch him because of his injuries. He was taken to nearby Metropolitan Hospital in stable condition.

“These are senseless acts on defenseless people experiencing homelessness, and somebody knows this person,” said Commissioner Sewell.

If you recognize the suspect in the surveillance images or have any information that can help police, you’re asked to call the NYPD’s Crime Stoppers Hotline at 1-800-577-8477. 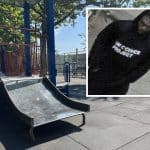