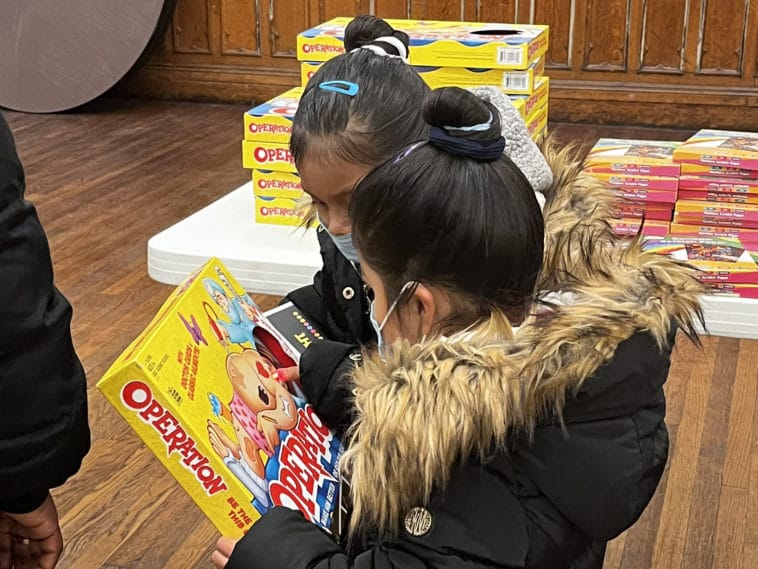 MANHATTAN – Small groups of families began arriving at 11:00 am. First a few, then more began trickling in. They were tentative. Curious. It had been a long, tough slog for many of these families through two years of struggling to make ends meet during the pandemic. Now, it’s the Saturday before Christmas, and they found themselves at UES Mutual Aid Network’s free holiday ‘toy store.’

In they came through the door of the Church of the Holy Trinity on East 88th Street, between Second and Third Avenues— parents with young children, four to nine years old, making their way from one table to the next in the large, bright vestibule.

Children shyly sifted through stacks of 175 brand-new toys donated by generous fellow New Yorkers, one young girl was unsure of which toy to choose— her mother bent down and gently showed her a couple of toys she might like.

Behind them another mother waited with her two eager and excited children.

Each family patiently lined up, and slowly made their way around the tables where they would stop to look at the toys, picking up one here or there, trying to decide which one to take home.

Emanuel, one of the parents, looked relieved and satisfied.

“It’s a wonderful experience,” the young father told us.

“It gives the kids something to do and it lets them know that there are places out here around Christmas time that do provide things for kids that some people can’t afford.”

At the church entrance, families were greeted by a tall, friendly young man, Patrick Bobilin, one of the organizers of the event.

When the ‘toy store’ opened its doors on Saturday morning, the joy in the air was palpable—along with stacks of shiny toys, there was also table with refreshments for all, served by friendly volunteers.

As Bobilin explains it, “You empower people by giving everyone a little bit of something to do to feel attached to the community.”

And when the community comes together as they did today, it is a win-win for all, he says.

“Now, more than ever, people need to know that there are people out there to support them,” event organizer Andy Llerena told Upper East Site, adding that neighbors need to know “there’s a network of neighbors out there who care about each other.”

At the end of the day, one hundred and twenty five happy children had taken home toys from UES Mutual Aid Network’s first ever holiday ’toy’ store— the rest were donated to a shelter for families escaping domestic violence. 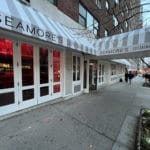 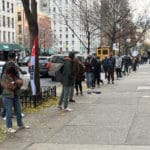