MANHATTAN – Walk past the unassuming storefront and you wouldn’t give it a second glance– unless you knew there was an inviting cocktail lounge inside— and that’s exactly how the minds behind a new Upper East Side speakeasy want it. ‘Keys & Heels’ is hidden away behind a storefront that looks like any other locksmith or shoe repair shop in the city.

Nestled between Uva and Doc Watson’s on Second Avenue— between East 77th and 78th Streets– Keys & Heels finally opens to the public tonight, after spending the past few months as a private event space and building a buzz among Upper East Siders on social media.

Step inside the speakeasy and you’re welcomed into a comfortable, intimate space where you can spend some sipping Keys & Heels strong craft cocktails with your main squeeze close by.

Small tables line the space, with a comfy sofa and coffee table in the middle to mingle and make new friends. Sometimes they kick things up a notch— once the disco ball starts spinning that’s when real the party begins.

On the outside, Keys & Heels advertises the ‘Best Quality Repairs’ since 1971— the front window filled with key blanks, hardware and shoe repair accessories on display.

Keys & Heels’ storefront even features neon signs reading ‘we make keys’ and ‘shoe repair’— you’ve probably seen similar ones in the windows of a real locksmith before.

The cocktail bar’s locksmith disguise is so authentic-looking, you’d might assume the owners built their lounge inside a real defunct shop— but you’d be wrong.

The speakeasy was previously home to a Pookie & Sebastian boutique, undergoing a dazzling transformation into an inviting lounge reminiscent of the roaring twenties— which are apparently making a roaring comeback a century later.

Reservations are being accepted for the grand opening weekend, but the lounge will normally offer walk-in service with first come, first served. 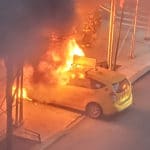