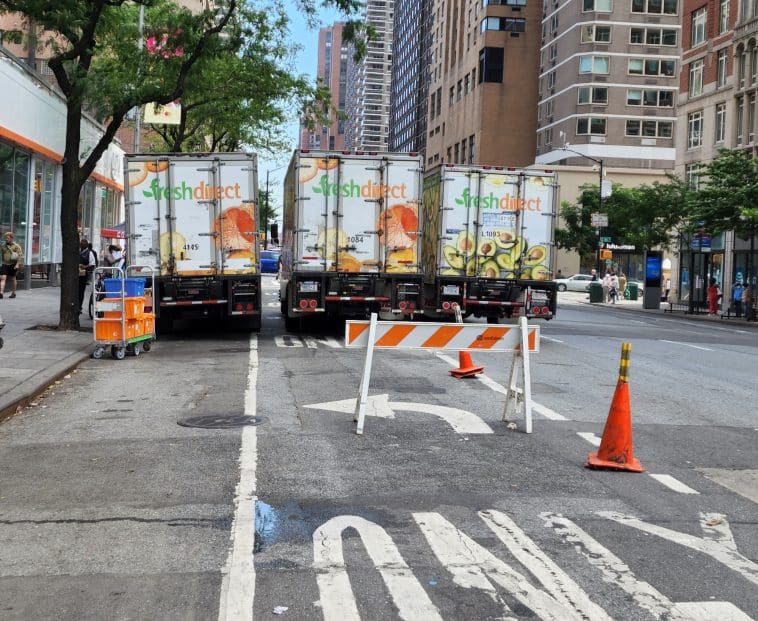 Through the toughest days of the Covid-19 pandemic in New York City, when we were all asked to stay in our apartments, home delivery of groceries became a necessity. Since then, the popular online grocer Fresh Direct set up shop on a busy Upper East Side block, slowly expanding with double and even triple-parked trucks clogging the roadway, using orange cones and a construction barrier that don’t belong to them to shut down a lane of traffic, to create their own private warehouse on the street.

“Fresh Direct is constantly in violation of the law,” says Andrew Fine, vice president of the East 86th Street Association.

“They even use barriers and bollards to demarcate their illegal parking like they own the place!” exclaimed Mr. Fine, furious over the company’s actions.

It’s not clear when exactly the grocery delivery service began occupying the stretch of public property, located on Third Avenue between East 85th and 86th Streets, or when workers decided to annex an entire traffic lane into their street warehouse— but the dangerous move has neighbors fuming.

On Tuesday, three Fresh Direct trucks could be seen triple parked on the block, bottle-necking traffic on Third Avenue causing even more congestion.

A few hours later, two of the trucks were gone, but a Con Edison barrier and cones belonging to the City’s Department of Environmental Protection were used by Fresh Direct to close the turning lane to traffic so they could store cases of bottled water.

“This seems to be their business plan— if the law is lightly enforced, or not enforced at all, flaunt the law, ignore it, play dumb, hide behind the corporate structure,” Mr. Fine explained.

On Wednesday morning, the Fresh Direct’s sprawling street warehouse contained hand trucks stacked with baskets full of deliveries, though it’s not like workers needed to store them there— the ‘commercial only’ metered parking spaces they have blocked off were nearly empty and some equipment was even occupying the sidewalk.

At that same location, workers even park their large box truck in the turning lane itself, when there’s plenty of space to park at the curb— flouting traffic laws as they take over public space with impunity, despite the danger working in the street poses for Fresh Direct employes.

Fresh Direct trucks frequently seen illegally parked to make deliveries across the Upper East Side, though their locations do occasionally change.

After questions were raised about their illegally parked trucks at the corner First Avenue and East 76th Street, when a moped rider fatally crashed into a truck last December, Fresh Direct abandoned the location.

“This is a game of whack-a-mole,” Mr. Fine says, “chased from one location, they practice the same game of dominating metered parking, hydrant spots and second and third lanes of traffic with no cares.”

“Between the lobbying and getting a steep discount on parking tickets, perhaps they do own the City!”

When Upper East Site reached out to Con Edison and DEP about the barrier and cones, both took immediate action, saying they were sending crews to retrieve their respective property from the area.

Fresh Direct did not respond to our multiple inquiries. 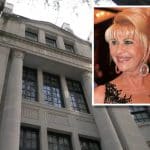