A homeless man’s Upper East Side sidewalk encampment, including a massive pile of cardboard signs, erupted in flames and quickly spread to two vehicles parked nearby, witnesses and officials tell Upper East Site.

FDNY officials say the first call for help about a rubbish fire in front of 300 East 95th Street —near Second Avenue across from Merrion Square pub — came in at 2:40 pm Friday afternoon.

A witness tells Upper East Site they heard popping sounds as the 10 foot tall flames burned through the piles of cardboard and spread to a HVAC company’s van and the SUV parked in front of it.

Hoses in hand, teams of firefighters, doused the intense, jumping flames from both sides — as the homeless man, whose encampment and cardboard signs were burning, sat on the median along Second Avenue with more cardboard piled up around him there as well.

The homeless man, cigarette in his mouth, only stepped away from his multiple large piles of cardboard that morning to hold up a single sign to drivers passing by.

Once firefighters got Friday’s fire extinguished, a propane tank could be seen in the area of the encampment, next to the burned out van — however, it is not clear what role it may have played in the incident.

The FDNY tells Upper East Site that Fire Marshals are investigating what exactly sparked the flames. 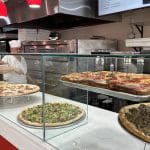 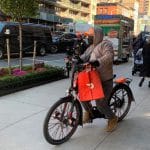