MANHATTAN – Less than 24 hours after a small army of firefighters flooded an Upper East Side block to save a historic church from the flames burning holes through the roof, we now know what sparked that fire— a welder’s torch used during construction earlier on Monday, a spark apparently smoldered for hours before lighting up— according to Church of the Epiphany Interim Rector Reverend Roy A. Cole.

Firefighters raced to the scene on East 74th Street near First Avenue around 9:45 pm Monday night after security at the construction site made a call for help, according to Rev. Cole, who said in a letter to his congregation that no one was hurt in the fire, which was contained to a small section of roof over the central part of the church.

Video posted to the Citizen app shows flames shooting through the roof of the church in half a dozen places, all clustered together in the center of the building.

“It goes without saying that this has been a complicated and at times difficult journey for the Parish, Rev. Cole told parishioners, “yet throughout this entire experience I have seen you rise to meet each challenge and respond with grace and unwavering faith.”

Out front, firefighters could be seen climbing the exterior scaffolding attached to the Church, which is undergoing renovations, going in and out of windows checking the 133-year-old structure looking for pockets of fire between walls and floors.

The Jan Hus Presbyterian Church at 351 East 74th Street was bought by the Church of the Epiphany in 2018 and has been under construction for several years, including preservation of the historic facade of the building.

Rev. Cole says the those who have seen the damage say it does not appear to be structural.

“Our full construction management team is on-site along with our architects and structural engineer.”

A small crowd of neighbors looked on as first responders went to work to keep everyone safe, some on the phones with friends telling them about the frightening ordeal on their block.

An FDNY command post was set up across the street as firefighters doused the flames and searched the Church, declaring the fire over at 10:23pm. 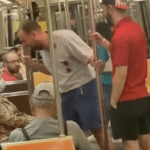 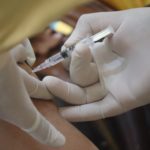