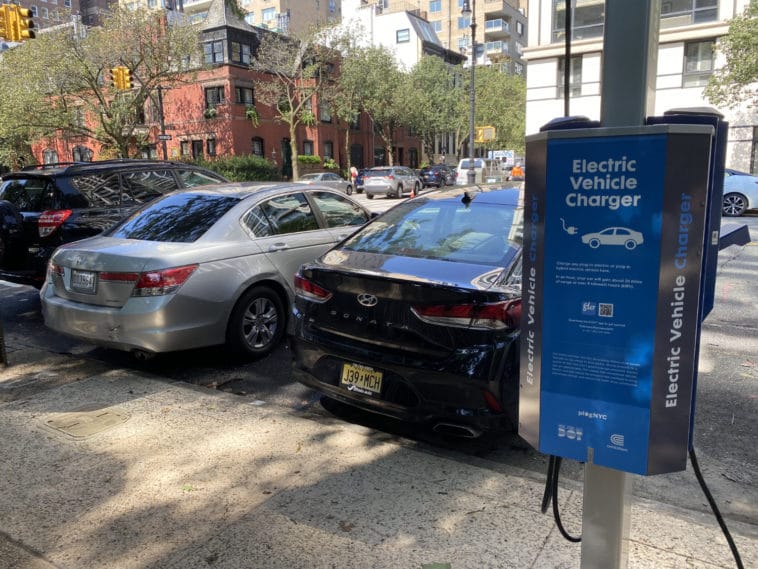 MANHATTAN – More than a year in the making and long-awaited by some, officials flipped the switch on two brand new on-street electric vehicle charging stations next to Carl Schurz Park on the Upper East side within the past week— and immediately the five parking spaces reserved for two charging cars were all blocked by gas-powered cars, two of which were towed there by Department of Transportation contractors.

The PlugNYC charging stations, operated by a Canadian company called FLO, provide Level 2 charging with enough juice to give an EV twenty miles of range in just an hours time for as low as one dollar– 100 of the curbside charging stations are expected to roll out citywide.

The curbside stations bring a low-cost option for electric vehicle charging to the Upper East Side where currently EV drivers are required to charge in private garages, which bill for the parking, the charging station use and the electric itself— which makes charging an EV on the UES a particularly pricey endeavor— two hours of charging could cost $50 or more.

Two additional curbside electric vehicle charging stations have opened on the Upper East Side as well– one located at East 67th and York Avenue near Rockefeller University, another on East 78th Street near Park Avenue– the low cost and convenience of street-side charging stations supposed to do more than help current EV owners— it’s meant to encourage EV ownership.

The Department of Transportation held a big launch event for the media when the first of the FLO charging stations were activated in the Norwood section of the Bronx in June, and since then chargers were next activated on the Upper West Side in July and then the Upper East Side— both Manhattan charging stations immediately experienced problems.

Over the past month, Upper East Site repeatedly found gas-powered cars blocking access to the charging station on West 93rd Street. When we contacted the DOT, NYPD Traffic units came in and towed the cars out of the way, but that’s no long term solution— especially for a program meant to drive EV ownership.

Street signs clearly tell everyone that the area around them is for Electric Vehicle Charging Only— but that doesn’t dissuade selfish drivers from stealing the spaces reserved only for recharging.

Gas-powered cars aren’t the only problem, we found a Tesla parked that wasn’t plugged in, blocking the UWS station from use— it had received a summons.

Back on the Upper East Side, on Tuesday by Carl Schurz Park we found five gas-powered vehicles parked in the space on East End Avenue near East 87th Street meant to charge electric vehicles— two had been towed there from East 86th street by DOT contractors overnight so that the roadway could be milled before being repaved.

One white gas-powered car belonged to a Parks Department employee who was misusing their off-street parking placard to park their personal vehicle illegally— an ongoing issue the City has repeatedly attempted to curb.

We reached out to NYC Parks for comment and have not heard back.

The last two cars blocking the new charging stations were a black for-hire minivan with TLC plates—likely a ride-share app driver— taking a break and Jeep Grand Cherokee belonging to a doorman at 170 East End, a luxury building across the street— he left a sign on his dashboard saying to call him if the SUV needed to be moved.

Upper East Site called the number on the doorman’s sign and let the person who answered know the Jeep was blocking the charging stations— the voice on the phone thanked us but the Jeep was never moved.

Eventually, an NYPD Traffic Agent on regular patrol passed by— Upper East Site notified her that several gas-powered cars were blocking the stations— but she admitted she hadn’t ever written a summons for this type of violation.

Upper East Site has pressed DOT for answers as to whether they foresaw this issue or if they have a long term solution— they responded with a statement.

Curbside EV charging locations have corresponding parking signage indicating the parking spaces are for electric vehicle charging only. DOT continues to coordinate with our partners at NYPD, who handle the enforcement of these spaces, as these stations go live. We expect that as more curbside chargers are installed across the city, drivers will become acclimated to the new parking regulation.

This throwaway statement passing the buck to the NYPD and driver responsibility makes it clear that DOT has no long term solution to parked cars blocking charging stations– gas-powered or not– which are part of a pilot program with Con Edison it intends to expand citywide— and that if an EV needs to charge, drivers shouldn’t get their hopes up they’ll be able to charge close to home. 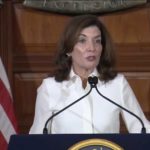 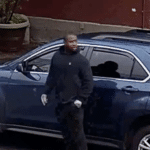