MANHATTAN – It’s a miracle no one was hurt in an inferno that sparked Tuesday evening in the engine bay of a yellow taxi dropping off an elderly woman and her home aide at their building on the Upper East Side. Flames shot into the air and explosions could be heard a block away from the scene, at the corner of East 83rd Street and First Avenue, in a fiery display that left everyone involved shaken.

“[The aide] grabbed my mother and pulled her out,” the elderly woman’s daughter said, exclusively speaking with Upper East Site.

The 88-year-old woman and her aide were on their way back from a doctors appointment to their Upper East Side apartment when they started to smell gas a few blocks from East 83rd Street.

The taxi driver, who’s been a cabbie for 42 years, says he then saw smoke coming from under the hood and stopped at the entrance to the building, so he could get out and look.

“When I see some smoke come up, I opened up the hood.. and I start to see fire,” the cab driver told Upper East Site in an exclusive interview.

The longtime cabbie says he saw flames like he’s never seen before and the flames were intense— video on social media showed the fire raging for several minutes and explosions were heard before FDNY crews arrived to douse the flames around 5:40 pm Tuesday.

“I just couldn’t believe it,” the shaken up taxi driver added, “this is not the first time I’ve been driving the car.”

The home aide pulled the 88-year-old woman to safety and all three managed escape unharmed from the fire and explosions that easily could have become a tragedy.

Passers-by gawked and took pictures of the burned-out Toyota Prius taxi as others asked around about what had happened– many were led to believe there had been a crash due to incorrect information alerted to Upper East Siders by the Citizen App.

Later, the elderly woman’s daughter could be seen speaking with the longtime cab driver about the fare.

“Why don’t why don’t we tell the taxi service that after them providing us with the car that exploded, we would like to have this ride for free?,” the elderly woman’s daughter said.

The cause of the fire is not known, but thankfully no one was hurt. 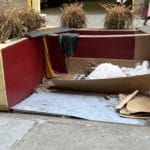