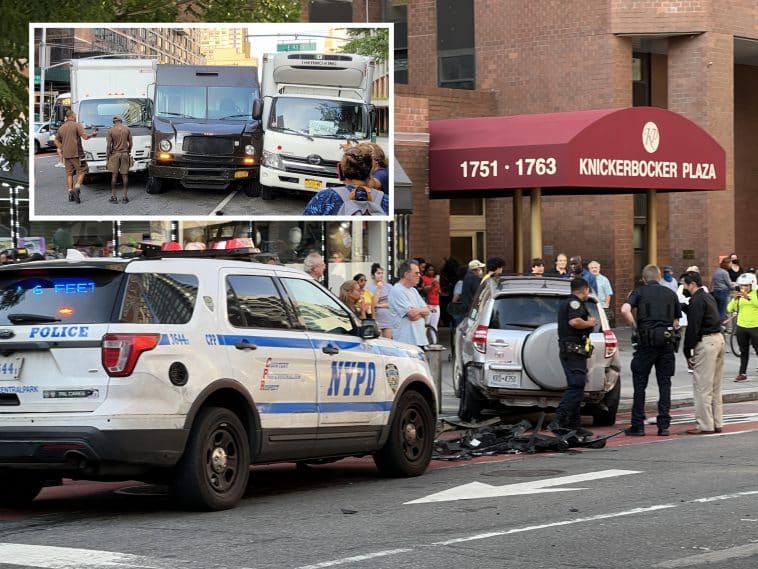 A chase through the Upper East Side ended with a crash and a gunpoint robbery | Upper East Site (main), Max Burns (inset)

A lost debit card left behind in a stolen Mercedes coupe— used to chase and ram another driver off the road on the Upper East Side in a wild daylight robbery caught on camera— helped investigators track down the two suspects and put them behind bars, Upper East Site has learned.

According to a criminal complaint obtained by Upper East Site, 29-year-old Denis Piters is the man in grey sweatshirt seen wielding a pistol during the robbery that turned a stretch of Second Avenue in Yorkville into a demolition derby back on afternoon of September 3rd.

Minutes before that dramatic car chase and robbery, police say Piters and his accomplice, 32-year-old Cristian Santana— identified by investigators as the driver of the Mercedes— were seen on surveillance video approaching the victim’s grey Toyota RAV4 for the very first time on East 96th Street between Second and Third Avenue just after 4:45 pm, the complaint states.

That’s when the Toyota took off down Second Avenue with the Mercedes in hot pursuit, weaving through traffic and setting off the chase that led to two box trucks crashing.

Both cars ended up driving in the wrong direction against traffic at one point, slamming into a parked Smart car before the smashed-up SUV ultimately got stuck on the curb in front of Knickerbocker Plaza at 1751 Second Avenue, between East 91st and 92nd Streets.

“We all ran back inside,” one man, still visibly shaken up by what he saw, told Upper East Site that day.

“We thought it was coming for us. It was scary.”

After the crash, police say Piters is seen on surveillance video getting out of the Mercedes and banging on the SUV’s passenger side window, trying to smash it open, before going around to the driver’s side— which the victim had fled— and grabbing a bag full of cash inside.

Officers found the black Mercedes abandoned on East 86th Street, near Third Avenue, minutes after the chaotic scene unfolded in front a crowd of people enjoying an otherwise quiet afternoon on James Cagney Plaza and in nearby Ruppert Park.

Inside the car, police say they found Denis Piters’ Cash App debit card, apparently dropped inside the Mercedes during the daring daylight heist. Crime scene technicians found Piters’ fingerprints as well, according to the complaint.

After ditching the stolen Mercedes, police say surveillance video showed Piters dumping a black object into a trash can on the corner of East 86 Street and Third Avenue.

When detectives went to the garbage dump in The Bronx where the trash had been taken, they say they found— you guessed it— a firearm, magazine and a dozen bullets used in the robbery.

Both Piters and Santana, of The Bronx, are facing four counts of robbery and two for possession of stolen property. Piters is facing additional weapons charges, while Santana has been hit with a reckless enlargement charge for his alleged actions behind the wheel of the black Mercedes. 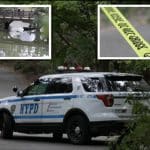 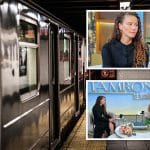