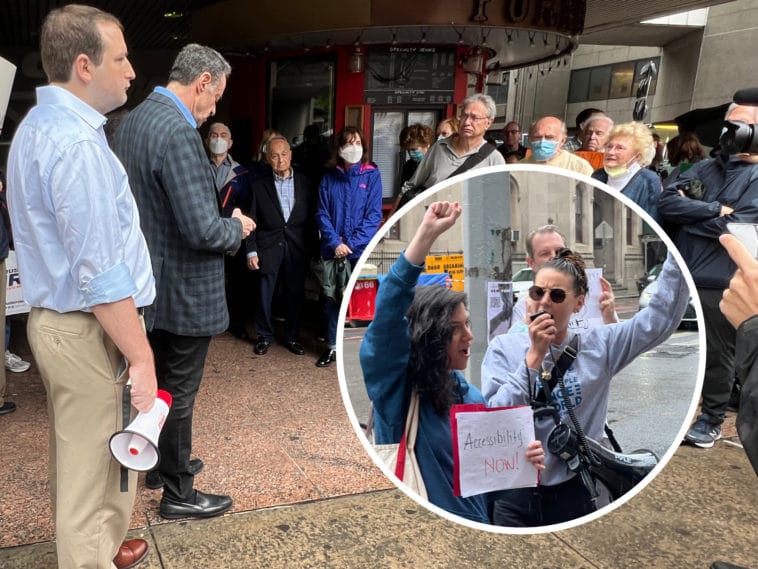 MANHATTAN – A small counter-protest held on Sunday, led by a disabled Upper East Sider, drowned out a rally against the MTA’s plans to install a subway elevator at the northeast corner of East 68th Street and Lexington Avenue, organized by controversial New York State Assembly District 73 candidate Russell Squire.

“When do we want it?” Lamorte asked. “Now!” they chanted back.

As Lamorte and company made it loud and clear that they wouldn’t stand for more delays in the $146 million accessibility project at the 68th Street-Hunter College (6) train station previously reported by Upper East Site, the Squire-led group spoke passionately and explained they aren’t against the elevator itself— just the planned installation location next to their luxury co-op, Imperial House.

“There’s going to be a lot of visibility [issues] for cars that are making turns, the buses that are turning here, cars that are coming out of the garage— it’s less safe,” said Russell Squire, who is also the Chair of Community Board 8, which had worked with the MTA on the project.

“It’s going to be much safer to have it on the south [side of the street].”

Residents of Imperial House raised concerns over traffic they believe could be caused by the elevator being built in the location of parking spaces on the north side of East 68th Street, while others noted moving the planned elevator to the south side of the street would place it closer to a bus stop, making it more accessible.

“It’s clear you are the voice of the community, you’re the local residents, the people who actually live here,” said Squire, who recently stirred controversy with mailings sent to Upper East Side residents criticizing his Assembly race opponents.

“I am going to continue to fight alongside you and with you to get this elevator built on the other side.”

Original plans called for the elevator to be built underneath part of Hunter College’s East Building at the southeast corner of the same intersection.

Opponents of the plan to install the elevator next to Imperial House claimed Sunday that the City University of New York— Hunter College’s parent organization— put the kibosh on that plan, foisting the burden of an elevator on the corner that abuts Imperial House, their high-end co-op that occupies the entire block between East 68th and 69th Streets from Lexington to Third Avenue.

However, that claim appears to be untrue— in 2020, the MTA said “during design development, it was determined that significant structural modifications (including re-supporting the structure, re-directing loads, and removing a floor/changing a floor elevation) would be required to install an elevator” under the Hunter College building at the intersection’s southeast corner.

While co-op residents pointed to the perceived benefits of the MTA’s original plan, Rebecca Lamorte said any more delays in this project come at the expense of disabled New Yorkers like her.

“I’m so glad to have about a dozen community members come out and join to fight for the right things which is accessibility now, not in fifteen more years,” Lamorte said.

The MTA’s accessibility project on the 68th Street-Hunter College station is expected to be complete in December 2024. 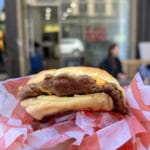