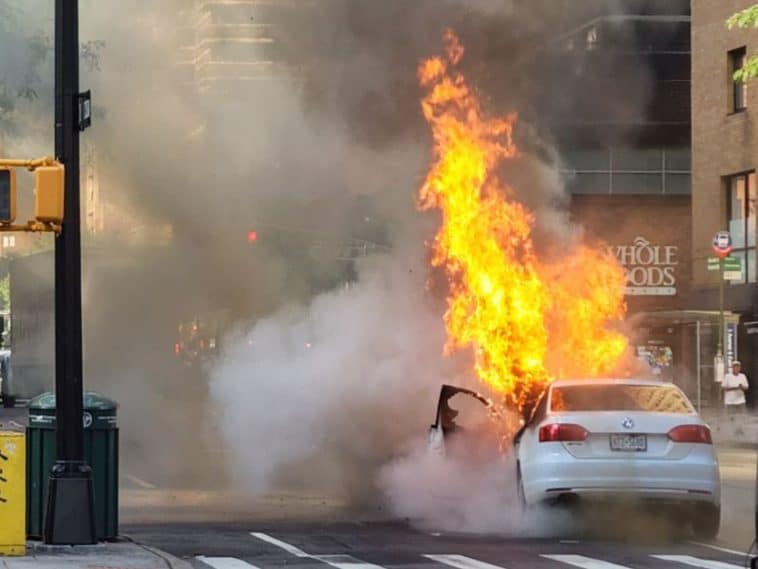 As the mercury soared to 92 degrees Saturday afternoon, with ‘feels like’ temperatures approaching triple digits, one car apparently couldn’t handle the day’s sweltering heat and burst into flames at a busy Upper East Side intersection, creating a huge fireball that consumed the white sedan.

Photos from the scene show the Volkswagen Jetta consumed by fifteen foot flames in a lane of traffic on Third Avenue near the corner of East 86th Street, the typically bustling block in front of Papaya King and Lululemon virtually empty as thick, choking smoke poured from the car’s front end.

FDNY officials say the first call for help came in just before 5:00 pm and crews were able to knock down all the fire coming from the car in just over 45 minutes.

Thankfully, no one was hurt in the wild scene, however, the car appears to be a total loss.

Once the flames were extinguished by firefighters, the car’s interior was visibly burned out, the front wheels melted and engine bay charred.

Police later confirmed to Upper East Site that the white sedan had been involved in a fender bender with a truck a few minutes before the fire began.

The National Weather Service has placed the five boroughs under a heat advisory due to ‘feels like’ temperatures— which are caused by the combination of excessive heat and humidity— near or above 100 degrees expected through Monday night. 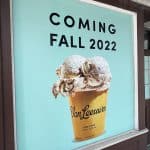 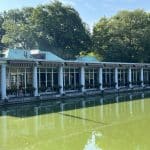