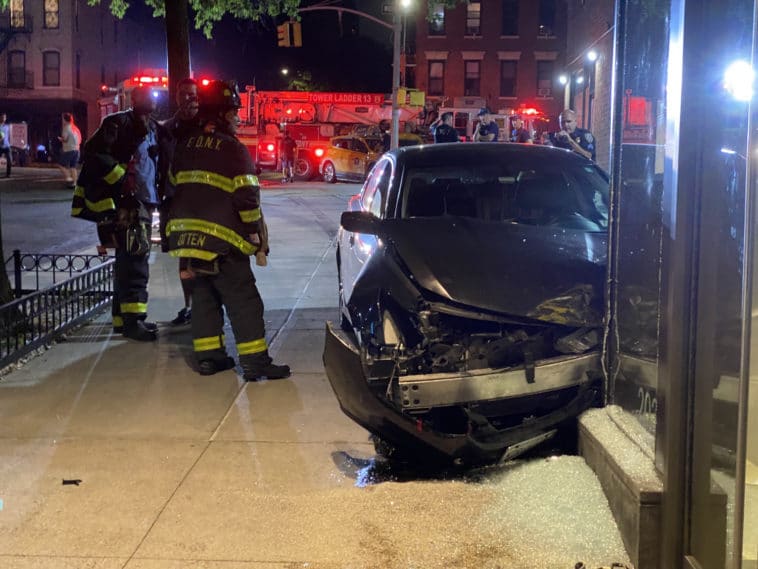 MANHATTAN – A frightening scene on Third Avenue just after 9:00 Sunday night, when a two car accident ended with one of the vehicles driverless, jumping the curb and slamming into the front of Equinox gym on East 92nd street between Third and Second Avenues– the accident sending three people to the hospital.

Eyewitnesses tell Upper East Site the black Nissan was coming down East 92nd Street towards the intersection with Third Avenue at the exact same time a yellow taxi on Third was crossing 92nd Street– it’s not clear who had the right of way, but neither stopped in time to avoid the violent crash.

One witness who says she had to dodge the moving wreck told Upper East Site that neither car slowed down or swerved to avoid the collision, which sent both to the side of the street road, broken plastic and glass strewn on the street and sidewalk.

However, the impact of the crash is not what sent the black Nissan down the sidewalk a few hundred feet where it slammed into the gym’s entrance.

A witness who heard the crash from her apartment in Yorkville Towers told Upper East Site she saw someone help the driver of the black Nissan out of the car after the crash.

Shaken up and possibly injured, it appears the driver did not put the car in park– so it just kept on going after the driver got out, not stopping until it smashed and shattered the glass front entrance of the gym.

The taxi driver appeared to have sustained a minor hand injury– and witnesses say a woman was put in the back of an ambulance, however, her injuries are not known.

Officials say three people in all were treated on scene by paramedics before being taken to Lenox Hill Hospital for further medical care.

It’s not clear if speed played a role in this crash, though neighbors were quick to note speeding is a problem on East 92nd Street with some drivers racing downhill from Lexington Avenue to make the traffic light.

‘They are always flying down 92nd [street]. It’s crazy,” one neighbor said.

Last summer, a similar frightening crash one block over sent a SUV spinning like a top into the outdoor dining setup for Delizia 92 when it was rear ended on 92nd Street at the intersection with Second Avenue.

Since then, the pizzeria’s owner has parked a car in front of tables set up on the street.